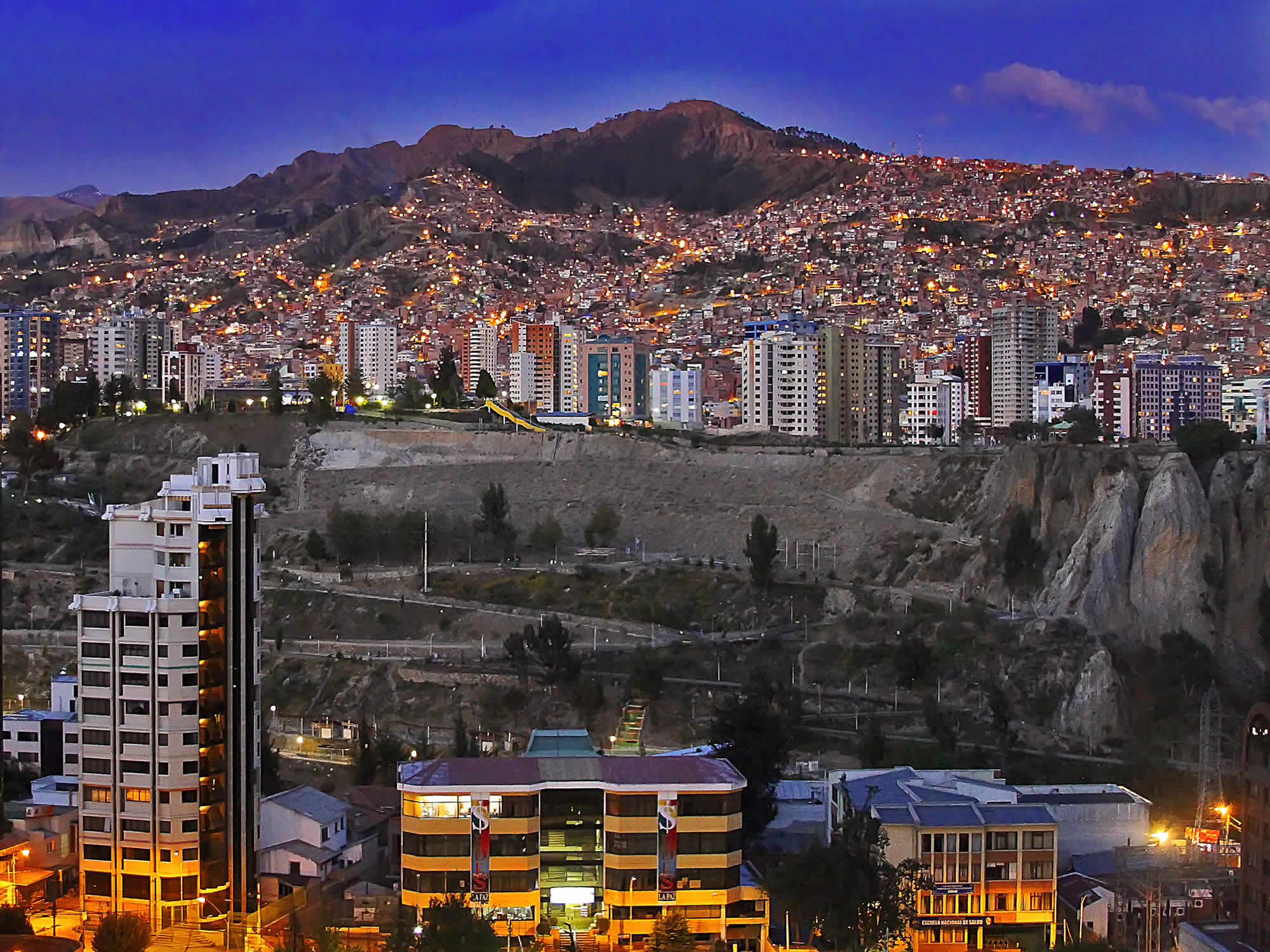 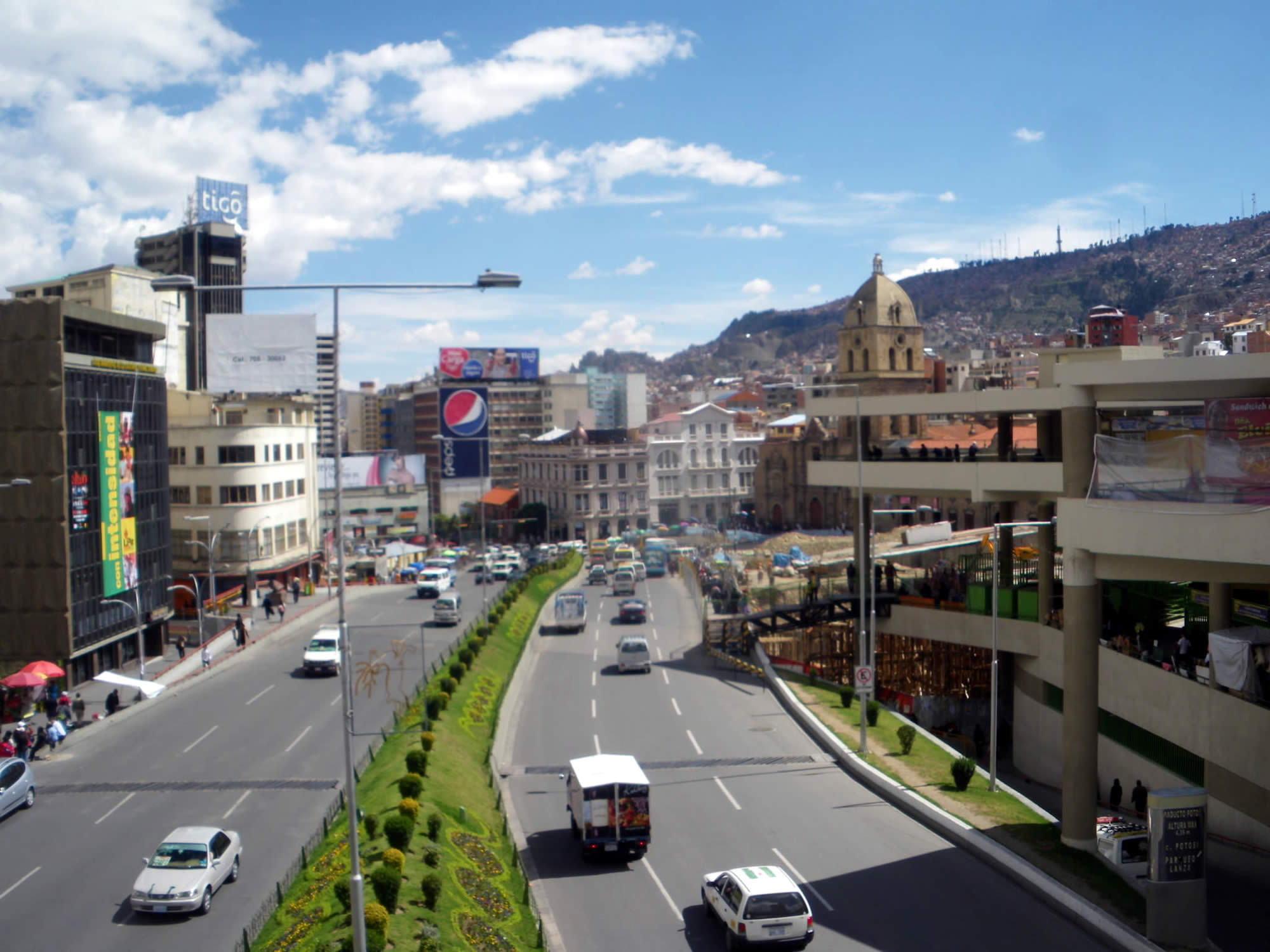 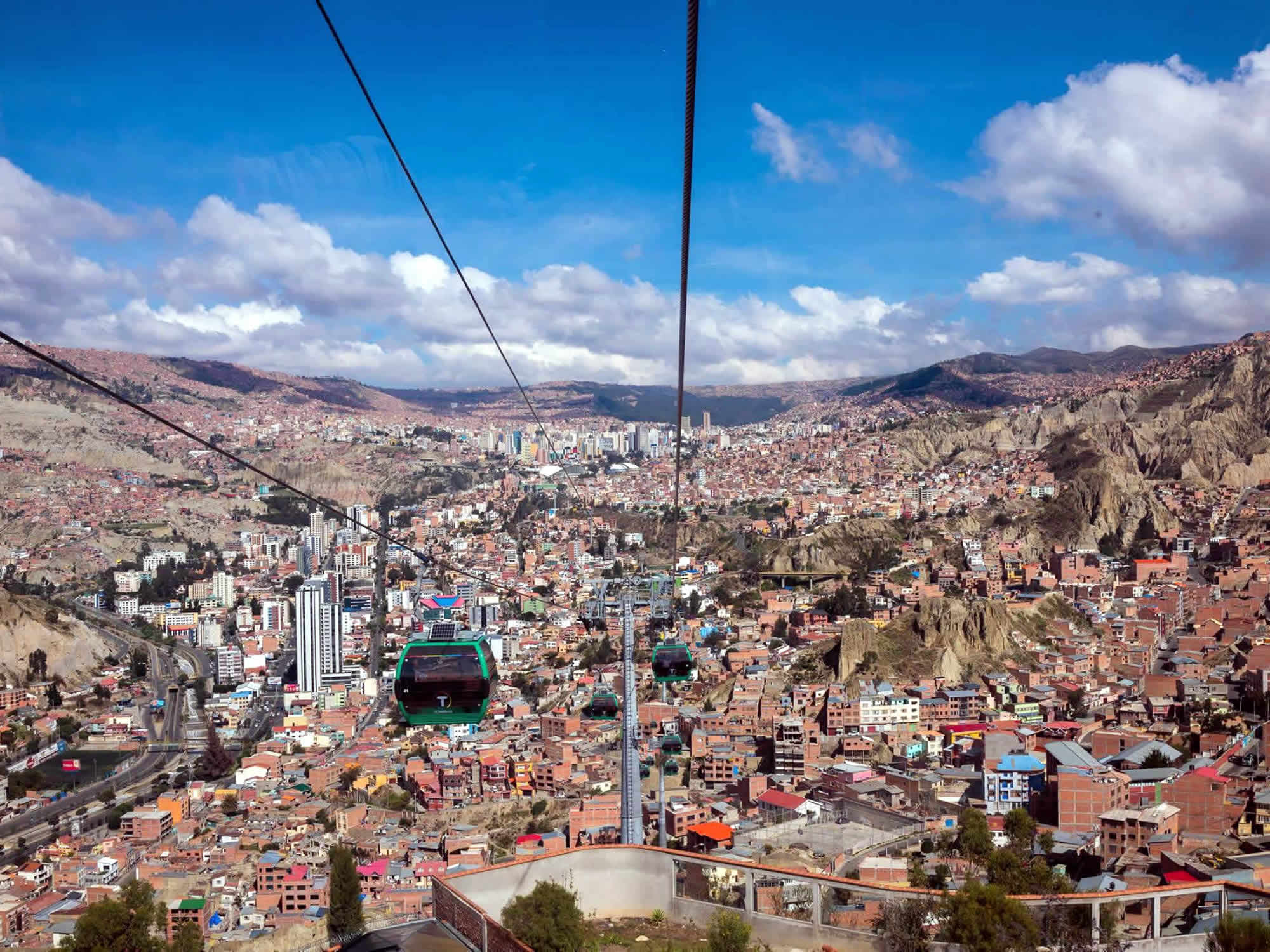 The city of La Paz was founded on October 20th, 1548 under the name of La Ciudad de Nuestra Senora de La Paz (The City of Our Lady of Peace).

La Paz is the administrative capital of Bolivia, while Sucre is the constitutional capital and the seat of the Supreme Court. La Paz was established in 1542, and is located in the Andes mountains. Altitude of the city ranges from about 4058 meters (13,313 feet) above sea level in El Alto (where the airport is located) to 3100 meters (10,170 feet) in the lower residential area. It is the highest national capital in the world.

La Paz was built in a canyon created by the Choqueyapu River (now mostly built over), which runs northwest to southeast. The city's main thoroughfare, which roughly follows the river, changes names over its length, but the central tree-lined section running through the downtown core is called the Prado. La Paz geography (in particular, altitude) reflects society: the lower you go, the more affluent. While many middle-class pacenos live in high-rise condos near the center, the really rich houses are located in the lower neighborhoods southwest of the Prado. The reason for this division is that the lower you go in the city, the more oxygen there is in the air and the milder the weather is. And looking up from the center, the surrounding hills are plastered with makeshift brick houses of those struggling in the hope of one day reaching the bottom.

The satellite city of El Alto, in which the airport is located, is spread over a broad area to the west of the canyon, on the altiplano.

There are three types of shared public transportation in La Paz: regular buses or "micros"; shared vans, called "mini buses", and shared taxis running set routes advertised on the windshield, called "trufis". All types have their routes indicated on the windshield, but mini buses have the bonus of fare collectors hanging out the side, yelling out routes in a rapid, auctioneer-like manner. You can hail a bus or mini bus anywhere; to get off, just yell out "voy a bajar!"

The easiest way to get around is by taxi. They aren't metered, so agree on a fare before boarding. If you want to go further, ask two or more taxi drivers before boarding. A normal ride by taxi from downtown to a place within the city won't cost more than 20 Bs.

If you ever find yourself to be lost, in general the easiest thing is to simply walk downhill. You will eventually find yourself on the Prado or another main avenue, then you'll be able to take a taxi to the downtown, if you are on the south side of the city (Zona sur).

Sagarnaga Street, just south of Plaza San Francisco, is La Paz' main tourist strip. It's mainly a market street with artesano and souvenir stores, but you'll also find budget hostels, tour and travel agencies, cafes, and lots and lots of backpackers. Don't be suckered by the roving sellers of "trilobite-in-a-rock".

The Witches Market (Mercado de las Brujas) is on Calle Linares between Sagarnaga and Santa Cruz. Vendors sell llama fetuses and dried frogs for Aymara rituals, as well as soapstone figurines and aphrodisiac formulas. This street is also the best place to pick up a charango or other Bolivian musical instrument.

The Mercado Negro ("Black Market"), though not very clandestine, is quite comprehensive, selling clothing, household items, liquor, and other products in its many blocks.
Eloy Salmon Shops on this street sell cheap electronics.

Calle Jaen is one of the few places in the city with preserved colonial buildings, currently housing several interesting museums.

The Valle de La Luna - surreal, weathered rock. Just outside the city. Take a local bus, or join a tour.

Museum San Francisco, Plaza San Francisco. This restored religious complex has housed some of Bolivia's most important historical moments, including the birth of the Independence Revolution of 1809. Also, one can climb the church tower to get a panoramic view of both the indigenous and Mestiza quarters. Displays are in Spanish and English along with personal guides.

Coca Museum, Calle Linares 906. A favorite of foreign tourists, this small museum details the history and significance of the coca plant, including the effect of the U.S. War on Drugs. The displays are in Spanish, but booklets of complete translations in other languages are provided. According to the museum, crack cocaine is the greatest epidemic since the Plague in the Middle-Ages. And yes, there are free samples of coca leaf for visitors.

Musical Instrument Museum (Museo de Instrumentos Musicales de Bolivia), Calle Jaen 711. Displays a huge collection of sound-producing devices from Bolivia and beyond, some of which you can play yourself. The museum was founded by charango master and inventor Ernesto Cavour, and some of his creations on display (such as multi-bodied guitars) are downright bizarre.

Submerged Museum (Museo Subterraneo), in front of the city stadium. Hardly deserving the name "museum", it's essentially a small outdoor plaza sunk into the ground with a huge replica Tiwanaku monolith in the middle of it.

Views. La Paz is a city which can be a sight in itself, and there are several viewing places or miradores offering impressive panoramas.

Parque Laikacota, at the top of Av. Ejercito west of the city center. The best panorama from within the bowl, with clear views of the city and the rugged terrain to the east, all the way to Mt. Illimani.

Mirador Monticulo, next to Plaza Espana. This small park (free entry) has a church and lots of trees which block much of the city, but the clear view of Illimani makes it an evening hotspot for couples.

In the heart of downtown, Av. Camacho points straight to Illimani, and from the intersection with the Prado it's framed by skyscrapers in an interesting juxtaposition.

PeñasOne of the most recognizable aspects of Andean culture is its folk music, which you can enjoy at a number of peñas, or music clubs.

Huari, Calle Sagarnaga 329. Its location makes it the convenient choice for foreign tourists, so be prepared for extreme tourist prices and slightly tacky decor. (The ancient Incas probably didn't have black lighting.) Nonetheless, the music and dance performances are excellent. Marka Tambo, Calle Jaen 710. Considered among the best for serious fans of the music.

Internet. Internet cafes are on each street corner in La Paz.

La Paz is a good place for buying maps of the country. Topographical maps are available in 1:50 000, 1:100 000 and 1:250 000. The most popular maps, including the 1:250 000 version of Cordillera Real and the 1:50 000 version of Volcan Sajama are sold by street vendors that roam Calle Sagarnaga and from stalls along el Prado. But the best place to buy maps is the "Instituto Geografico Militar", IGM. The instituto has two offices in town, listed below. Edificio Murillo No. 100, Calle Juan XXIII Parallell to Calle Murillo at the end of Calle Rodriguez. Oficina Central, Estado Mayor General, Av. Saavedra No. 2303.

The altitude of La Paz is well within the zone where altitude sickness could be a problem, especially for those arriving from at or near sea level. It's is highly recommended that you have adequate travel insurance, familiarize yourself with the symptoms of altitude sickness, and inform your physician to what elevation you will be traveling (up to 4,000 meters/13,000 ft. for La Paz, and 6,000 meters/20,000 ft. if you want to climb Huayna Potosi). Despite being near the equator, it does occasionally snow a little in La Paz during the middle of the year, and packing some warm clothing is a must year-round.

El Alto International Airport (IATA: LPB), El Alto. This is the world's highest international airport; at 13,313 feet/4,058 meters above sea level, it's almost half as high as a jetliner's cruising altitude and takeoffs take a bit longer due to the thin air. There is an airport departure tax for international and domestic flights.

Most South American airlines (TAM, LAN, TACA, etc.) serve El Alto Airport. Most international flights will make a stop over in Santa Cruz and Cochabamba to pick up or drop off passengers.

The main bus terminal is located on Av. Ismael Montes, near the upper end of the Prado. Note that buses arriving from Lake Titicaca (the route for entering overland from Puno, Peru) terminate at a plaza near the city cemetery (Cementerio) farther to the west.

Seven or eight hours by bus from Cochabamba

Three hours by bus from Oruro 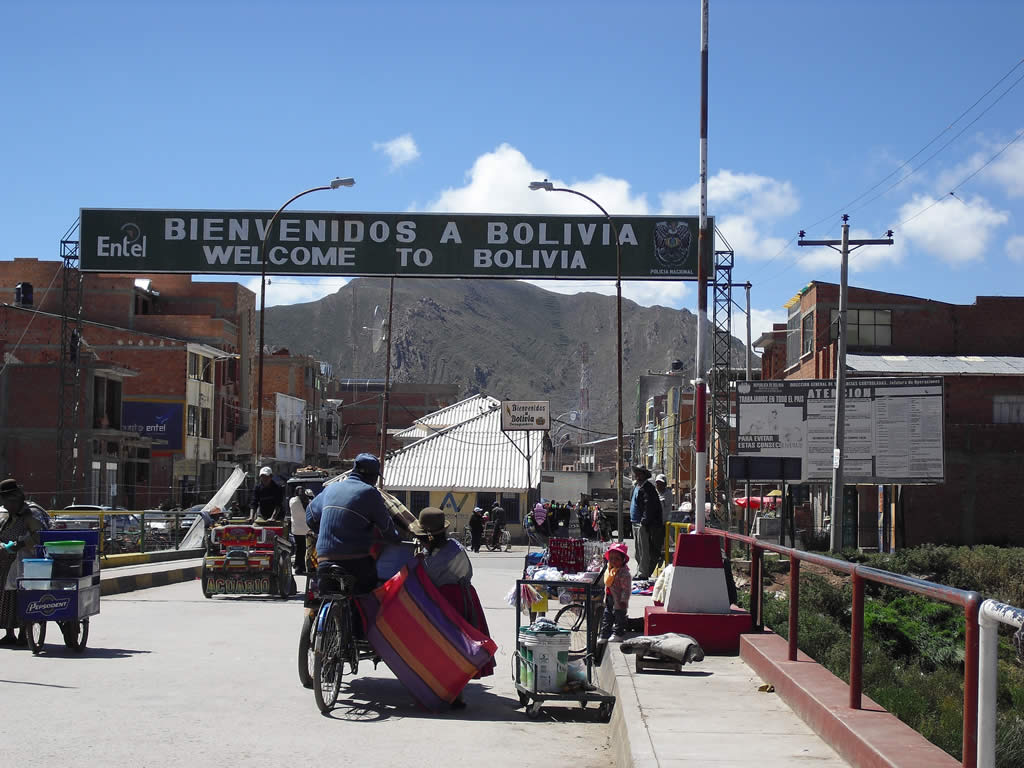 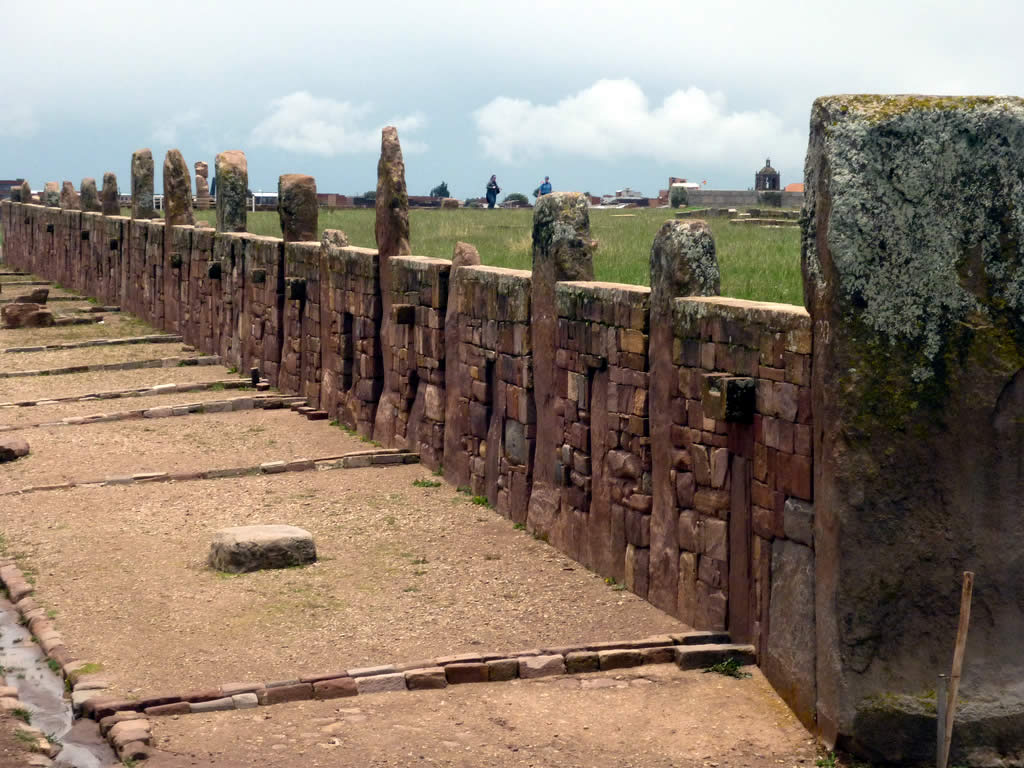 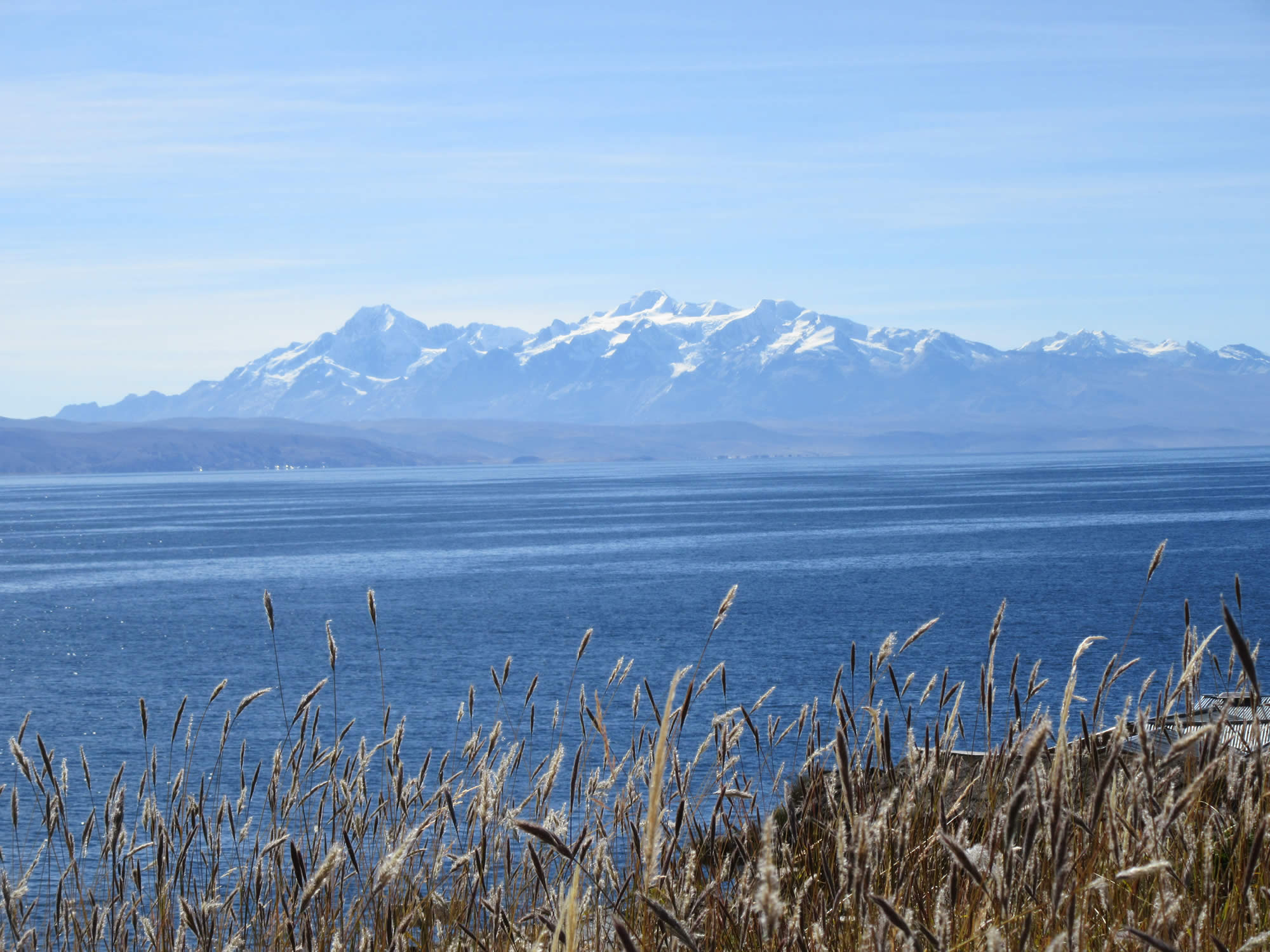 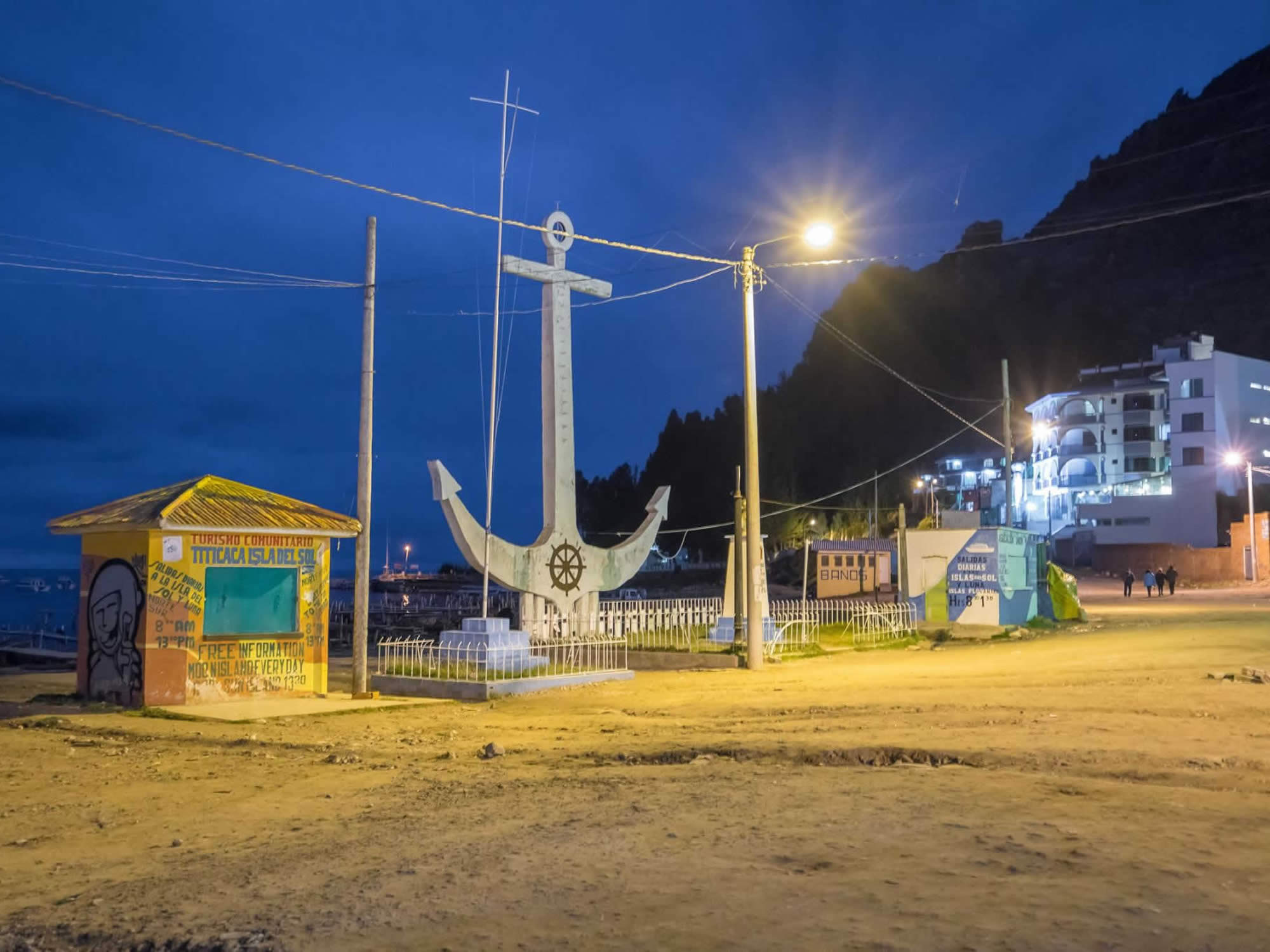 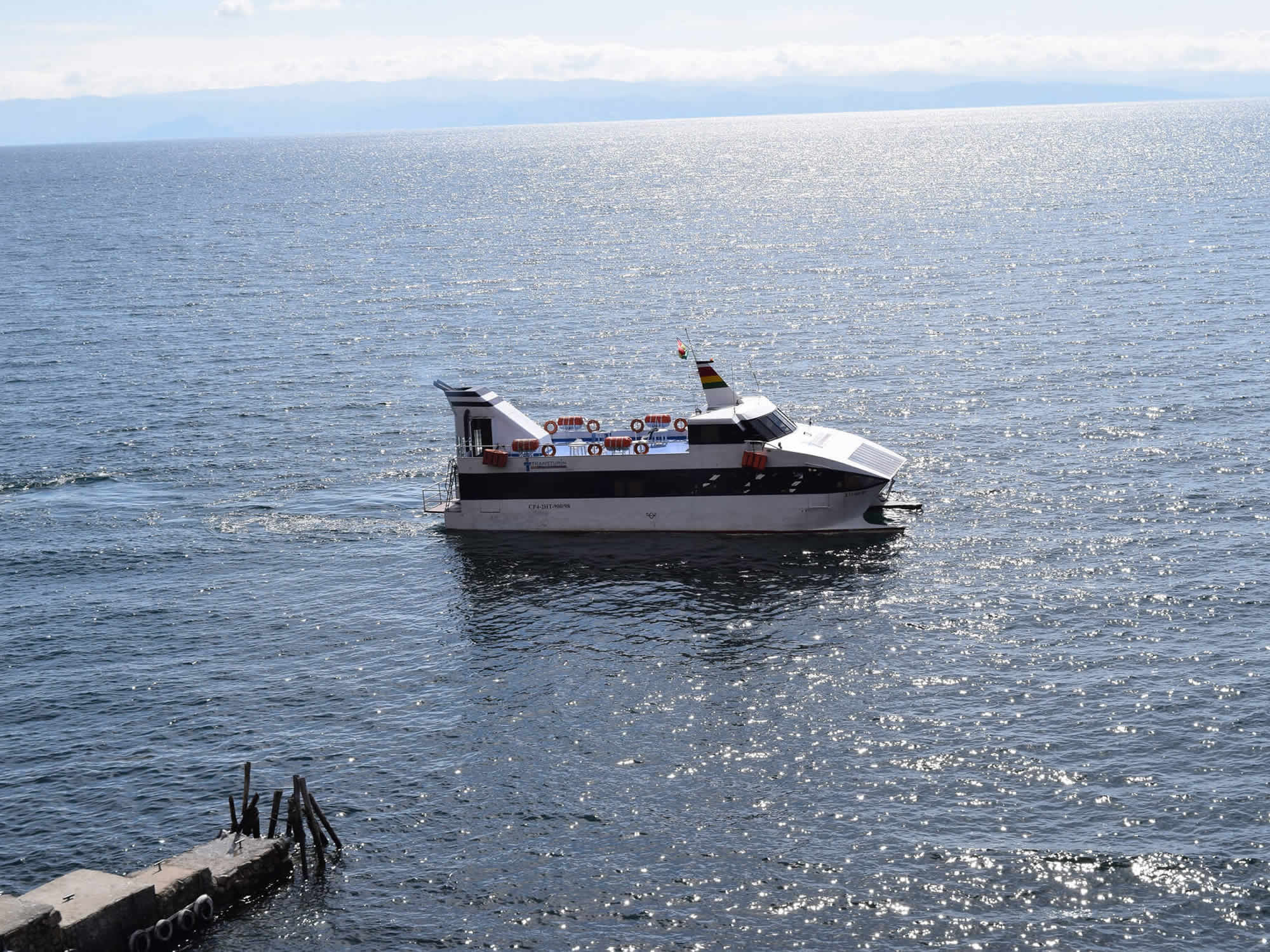 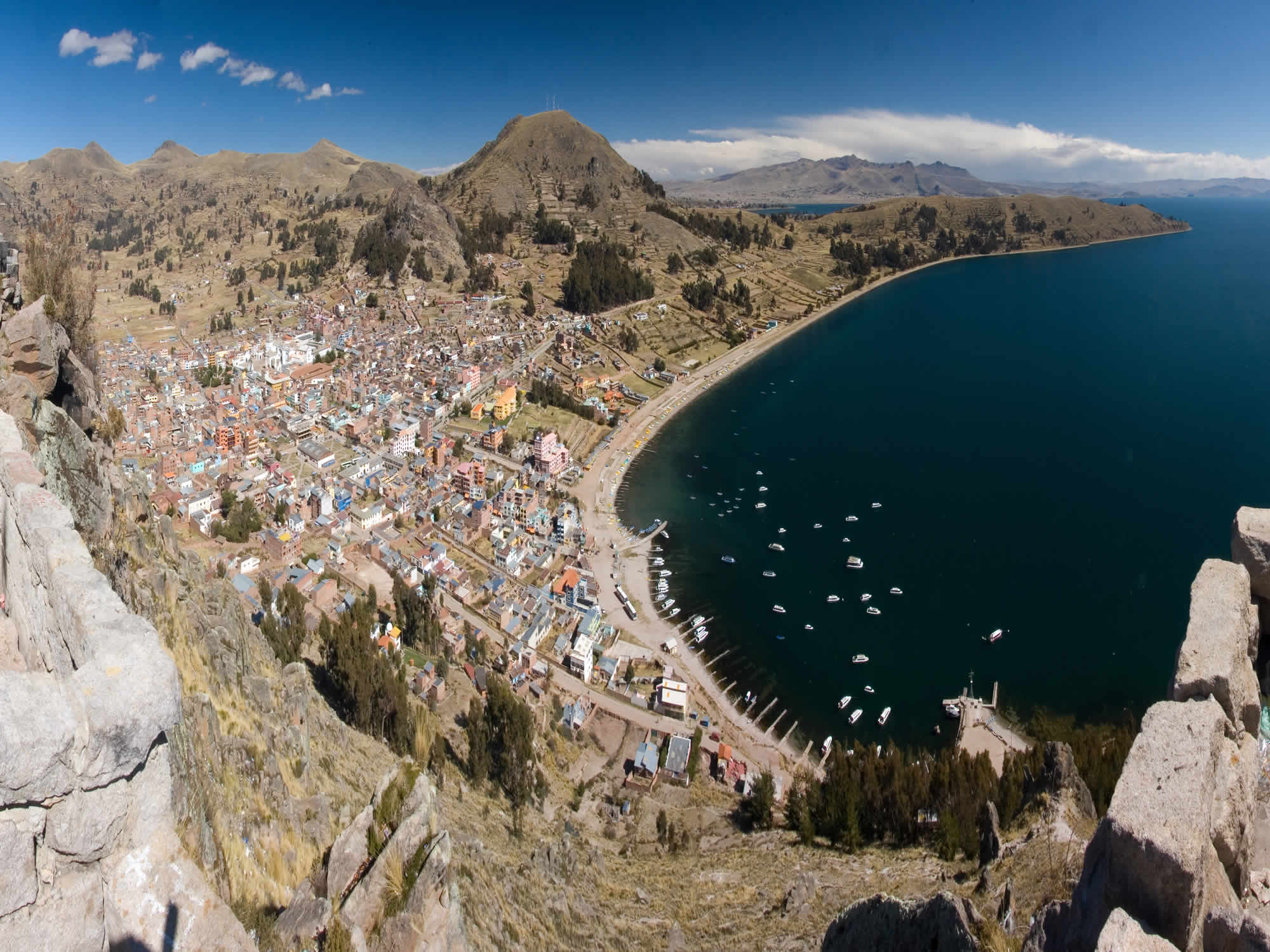 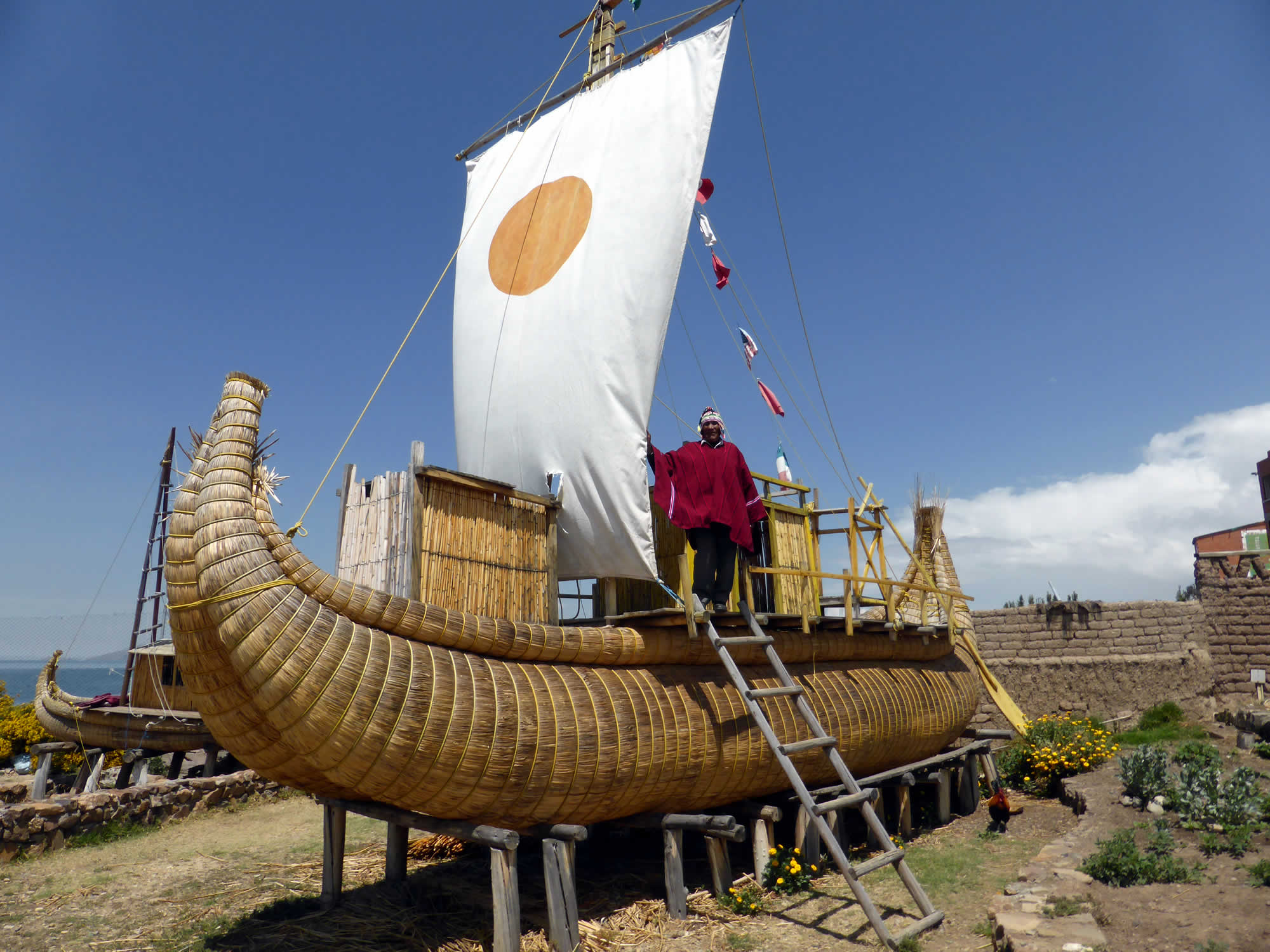 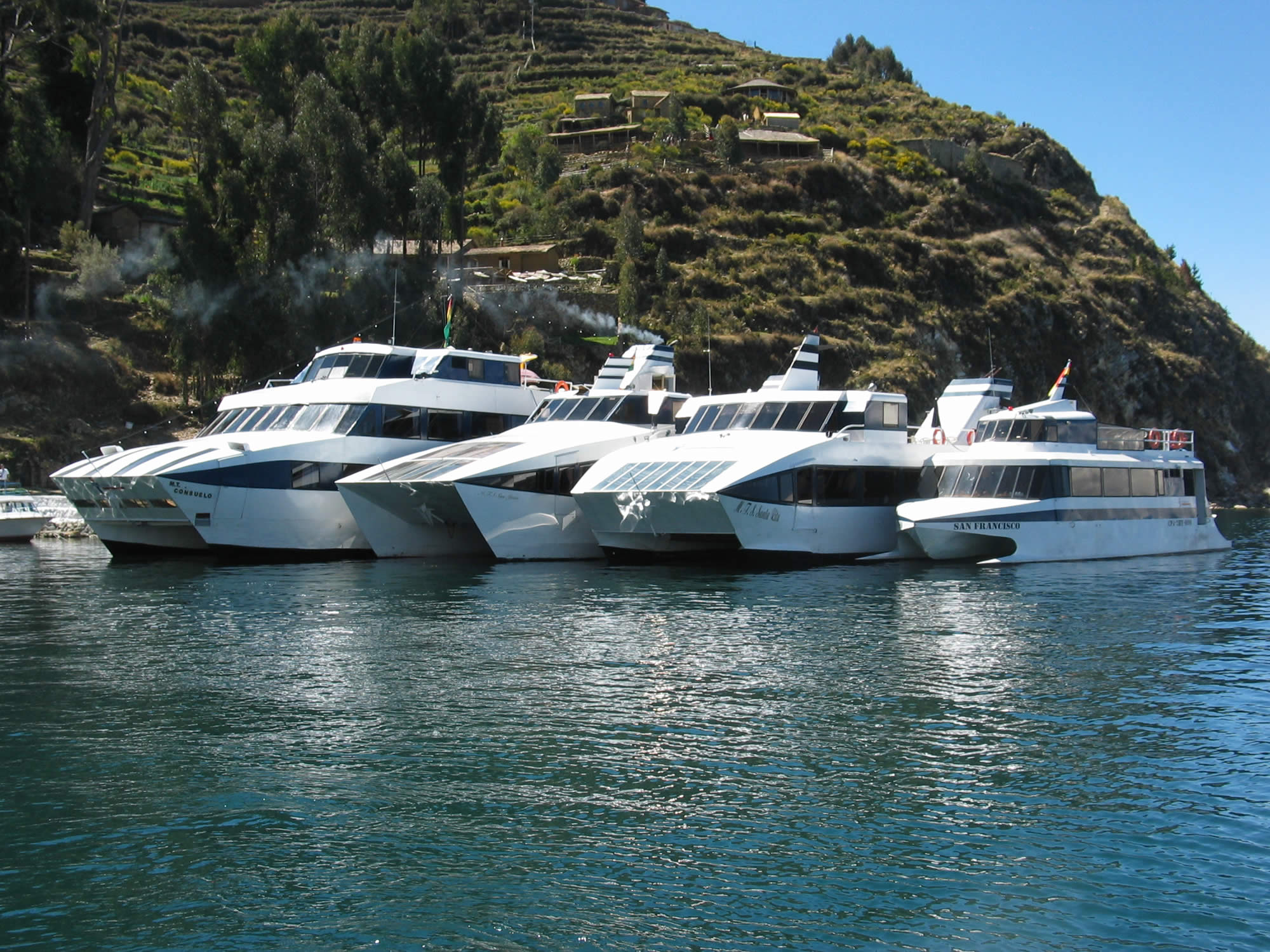 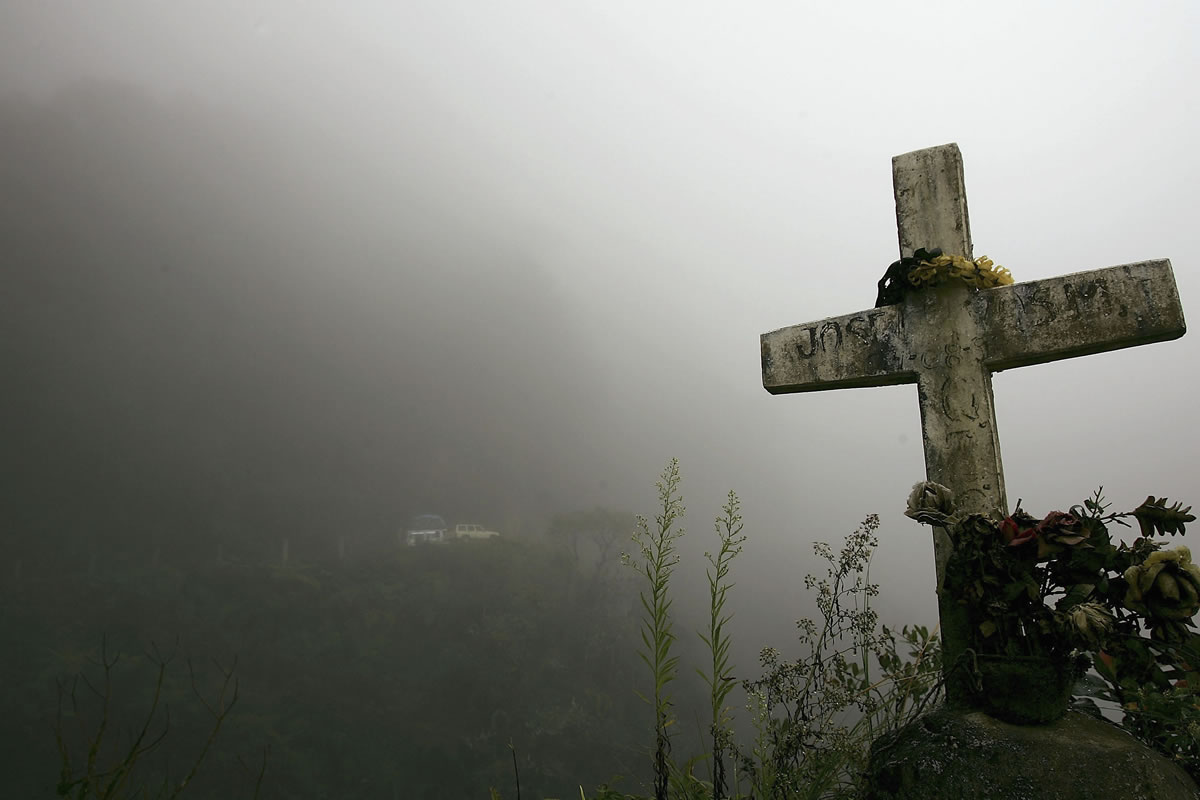 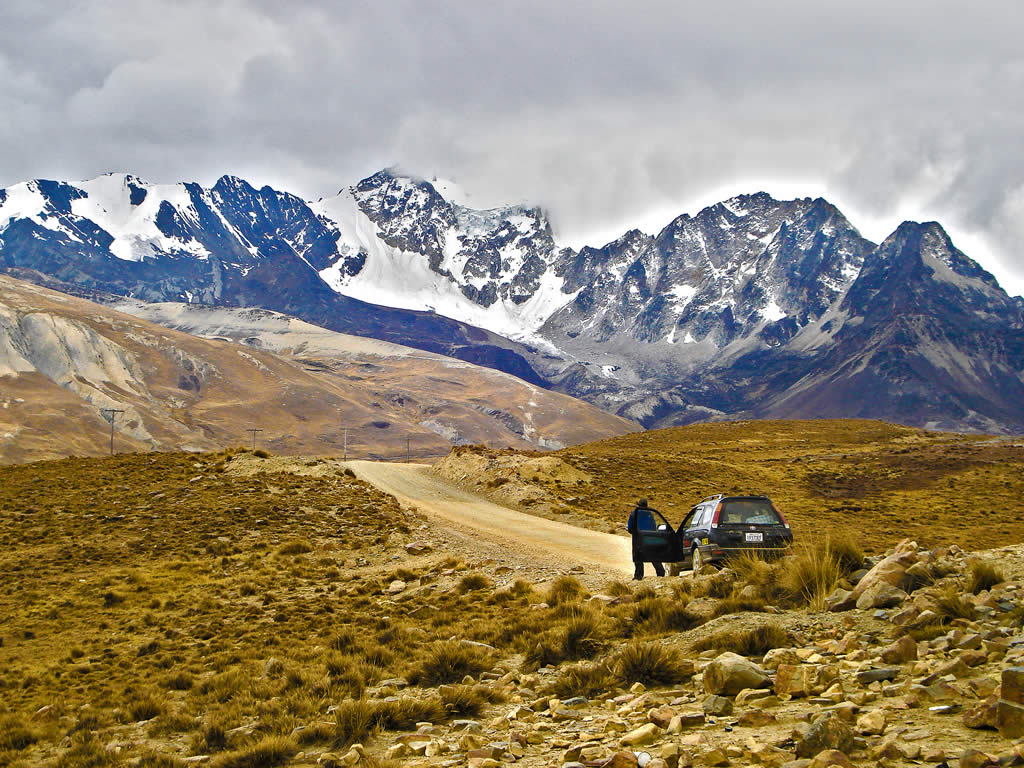 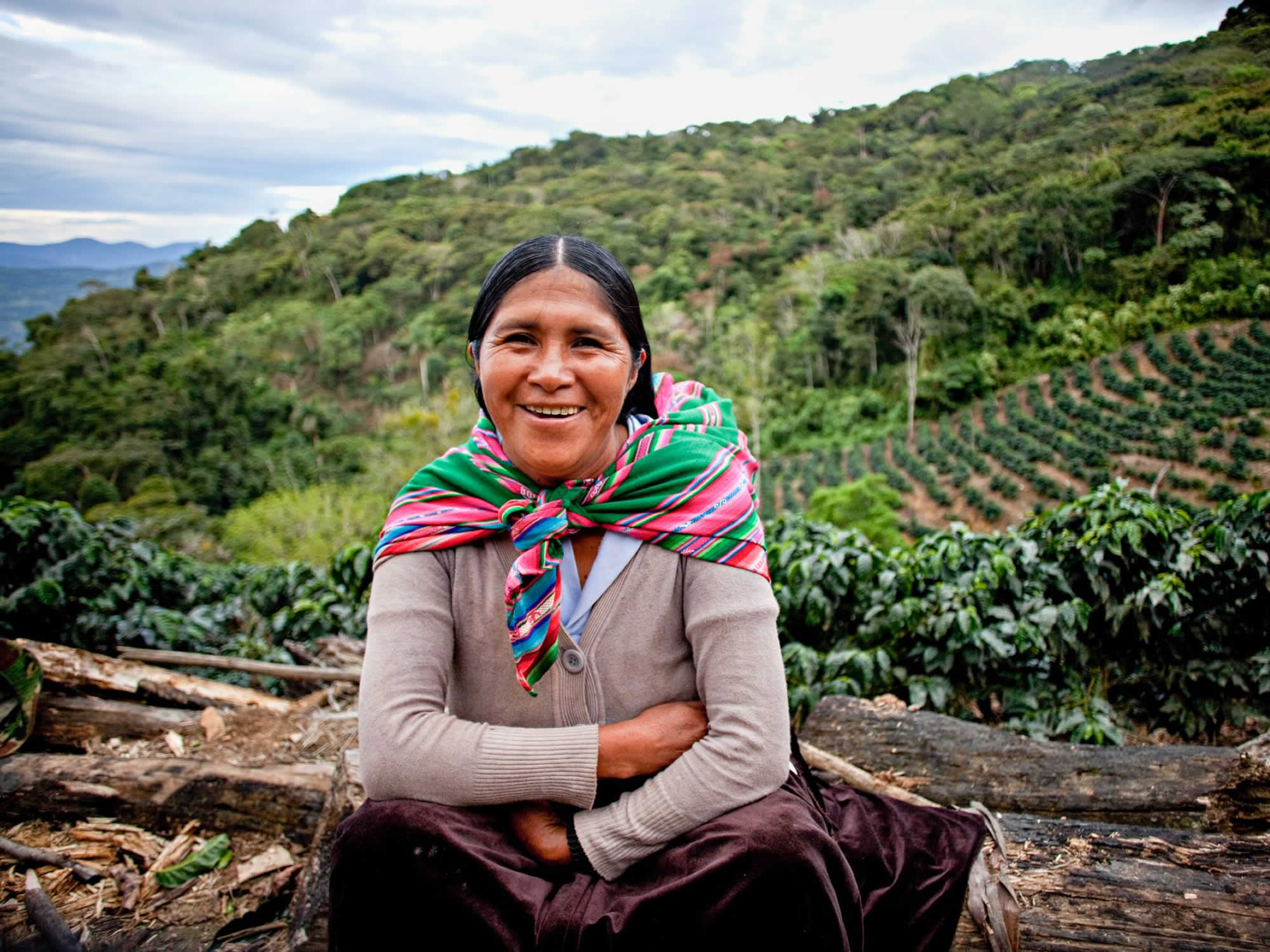 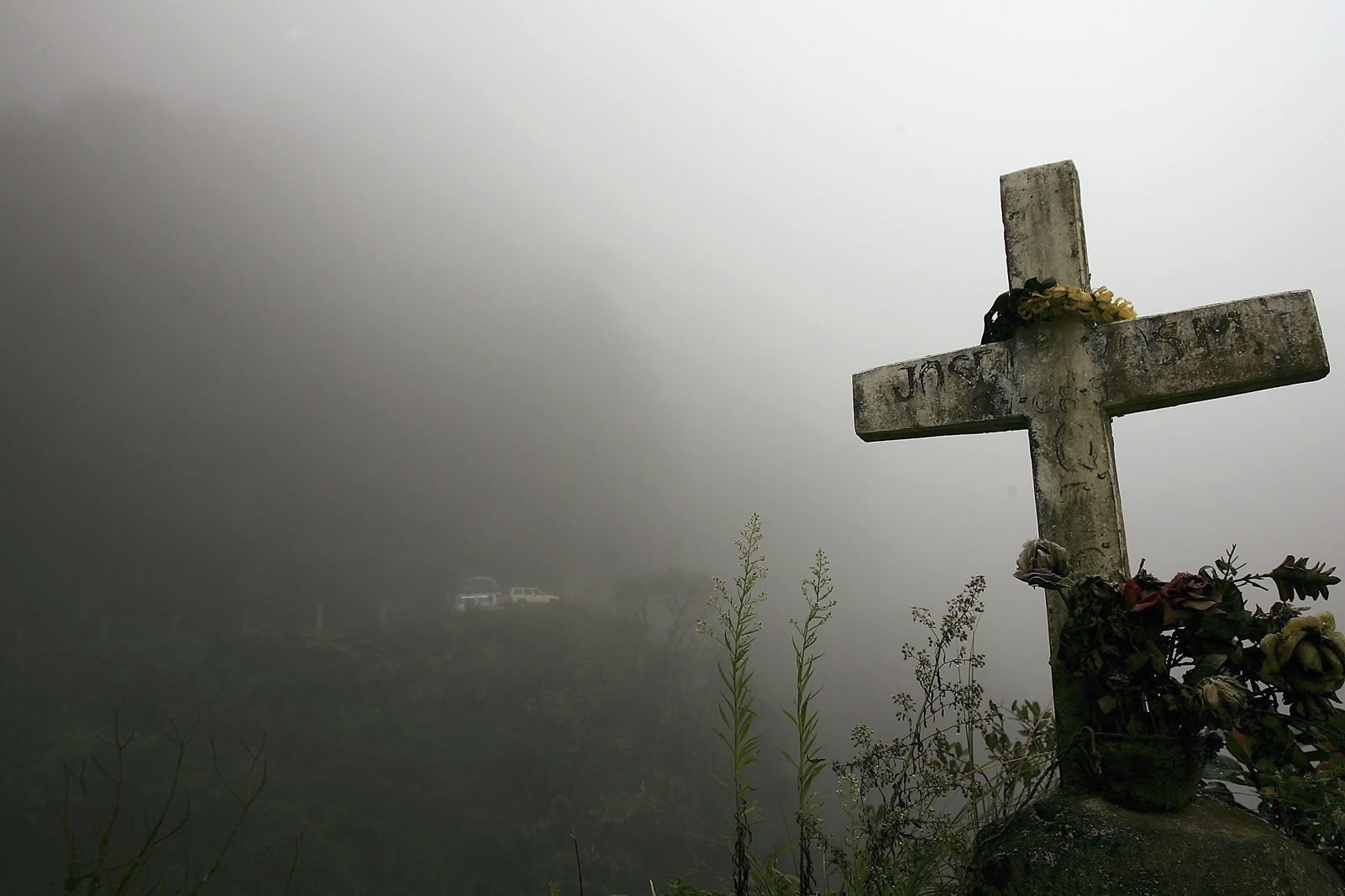 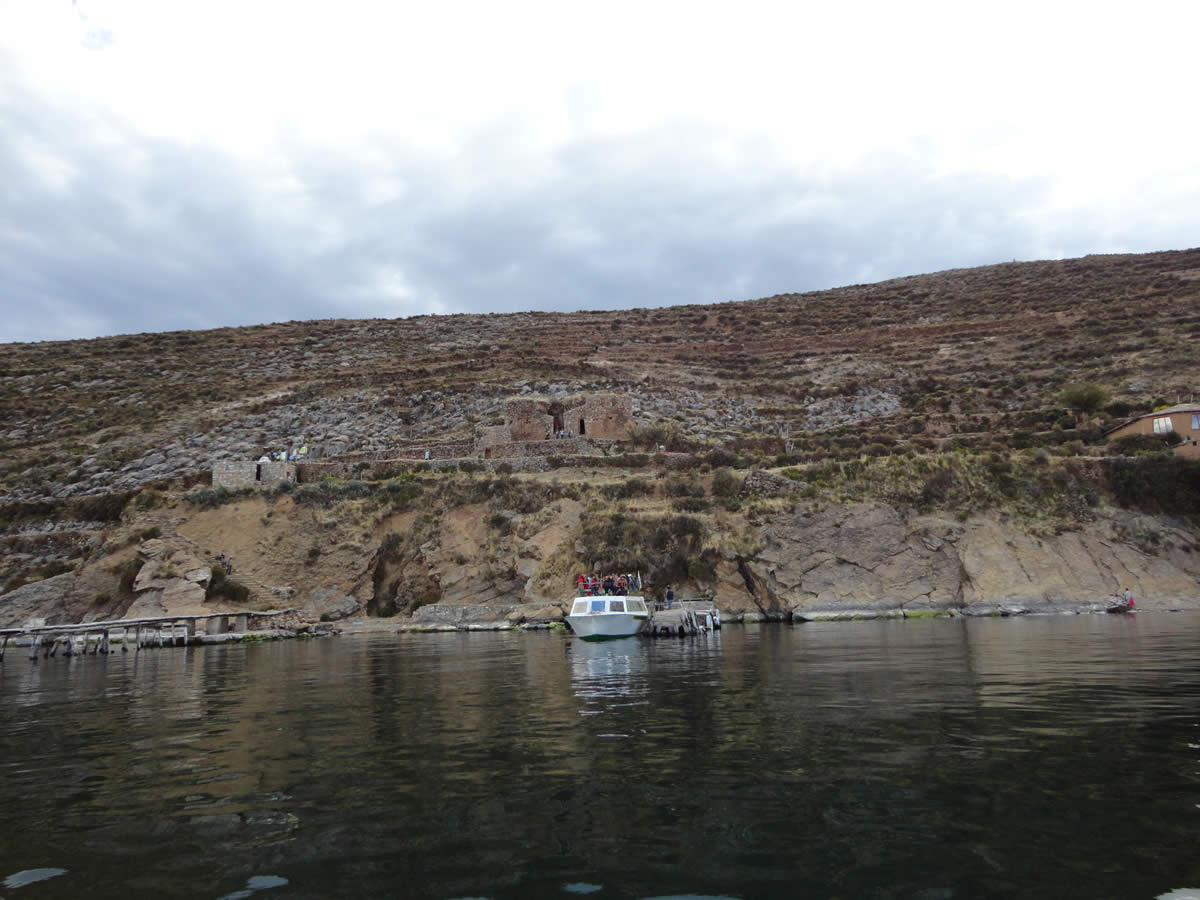