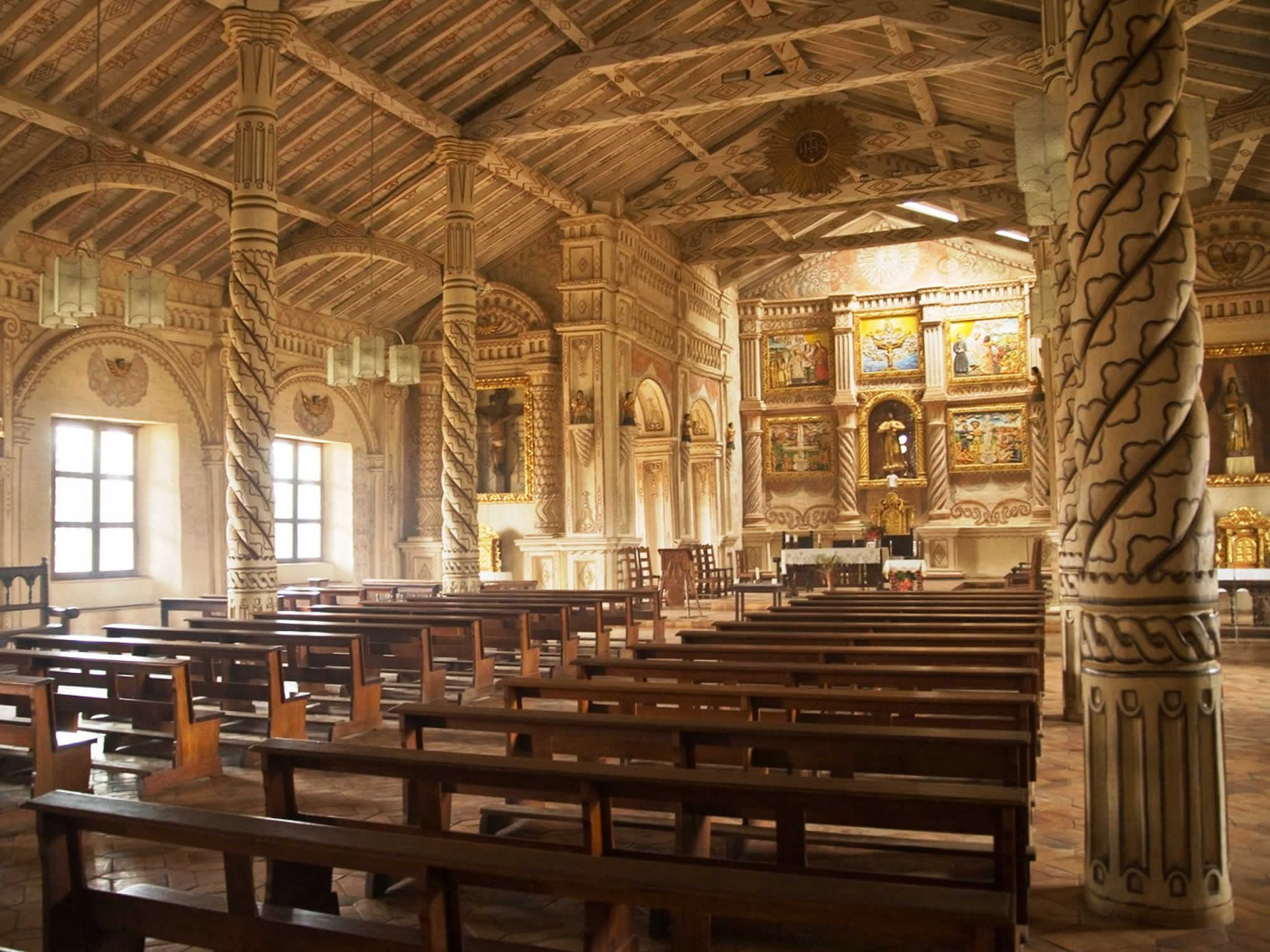 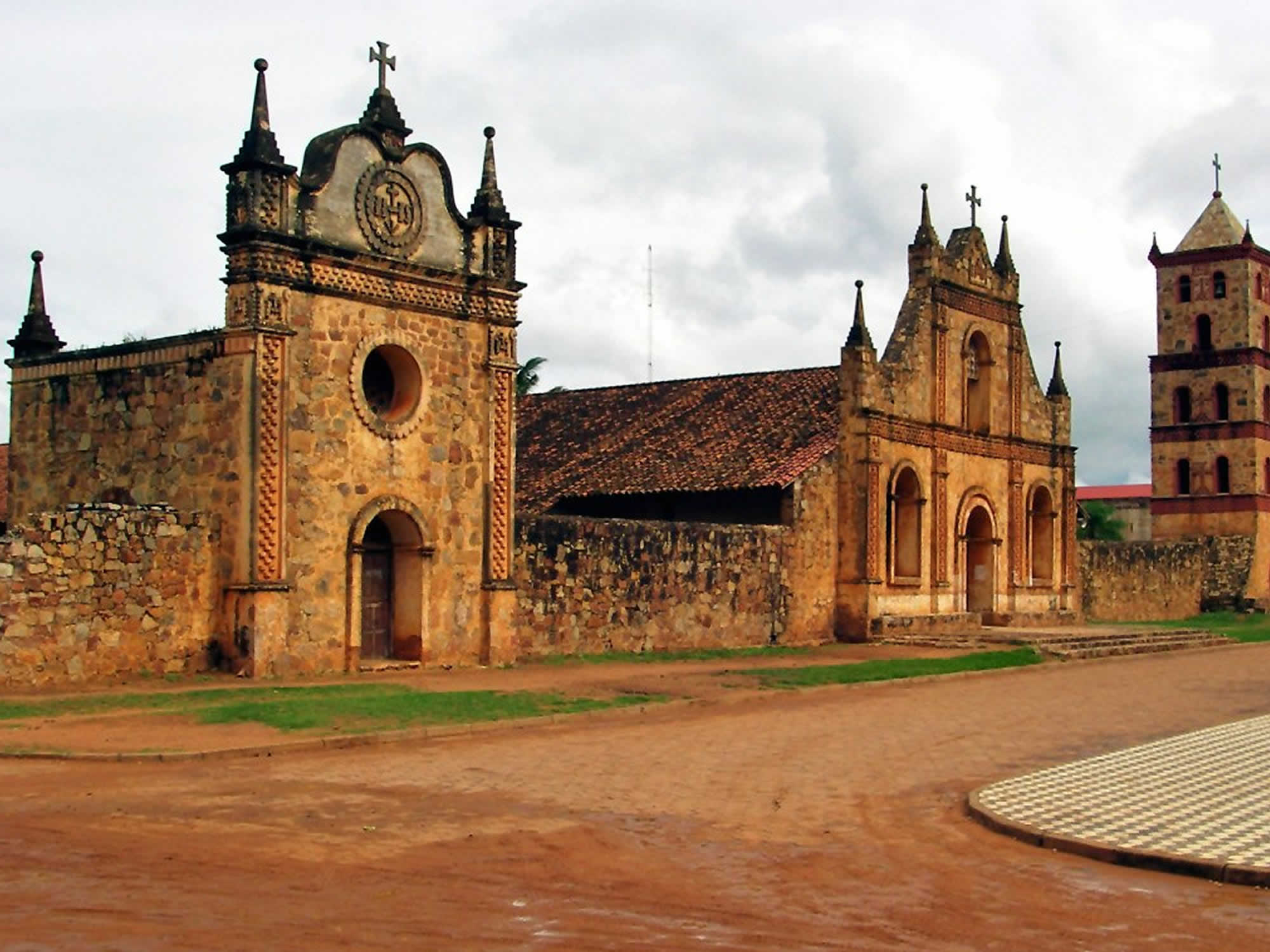 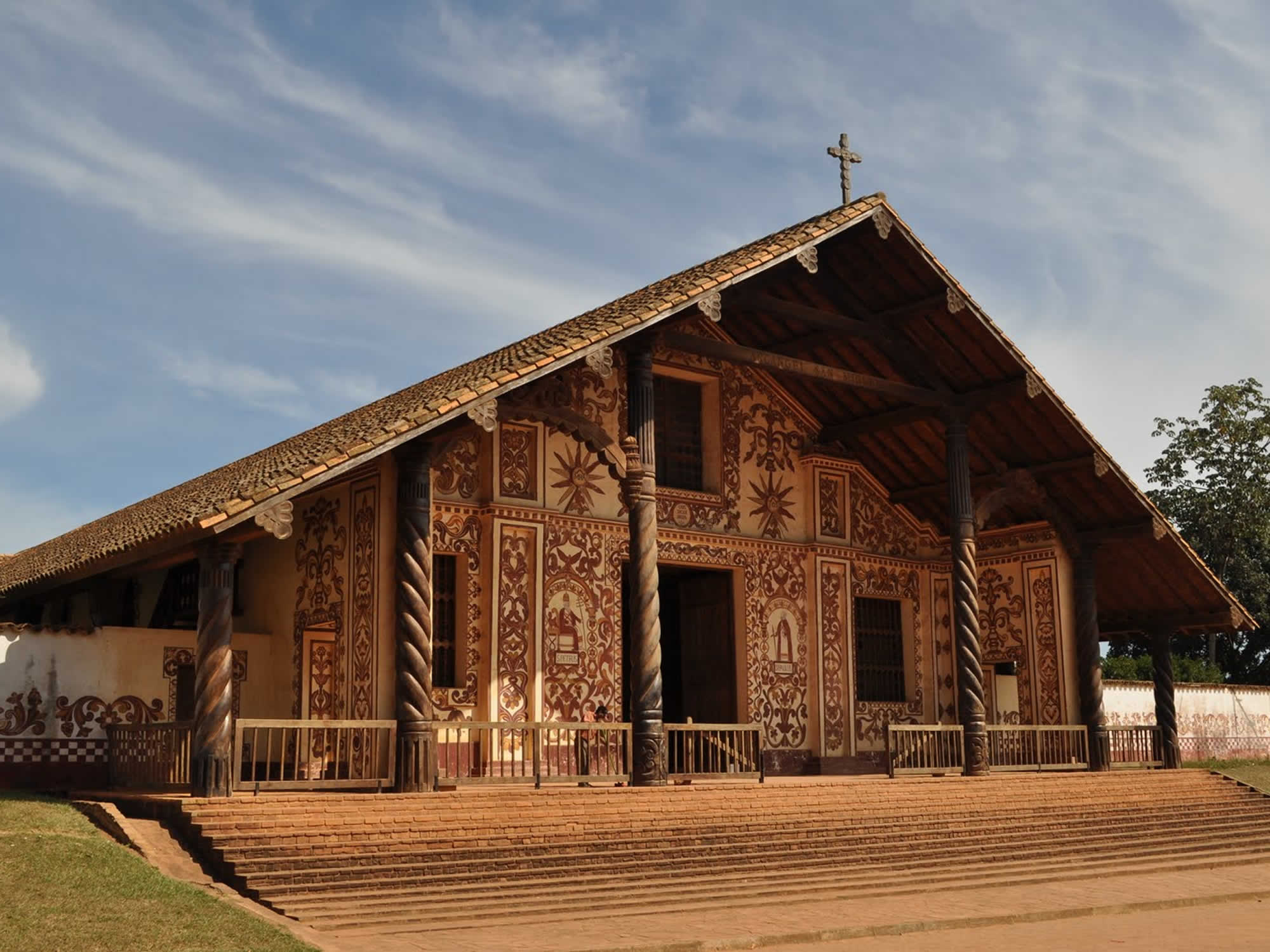 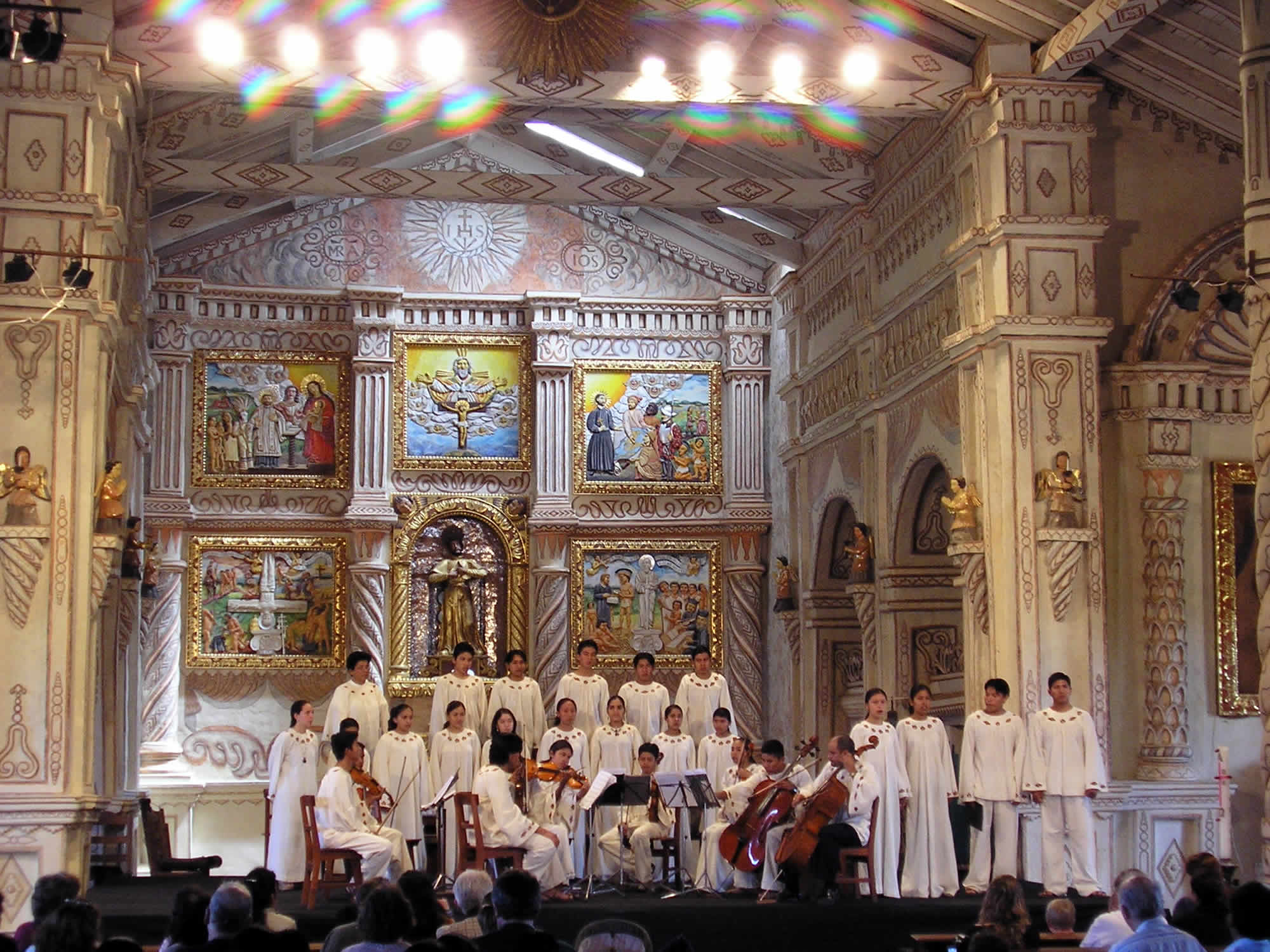 Prior to the colonial times the area of Chiquitos was populated by various indigenous jungle tribes. These were Evangelized by missionaries from the "Compania de Jesus" (Company of Jesus). Shortly afterwards various Spanish communities were constructed in the middle of the jungle. This included the various Jesuit missions of the area of Chiquitos, which were founded between 1691 and 1767. The Jesuit missions have remained intact and after hundreds of years, they continue to marvel the world. Today they are considered a valuable legacy from colinial times. Most of the churches have a classic baroque style with a strong influence of Bolivian half-breed decor. Inside the churches there are murals, golden altars, series of wooden carvings painted with gold, pulpits, sets of drawers and impressive columns.

This attraction is located on the eastern lowlands of Santa Cruz, at about 6 hours from the city.

The Jesuits arrived to this land with their dream of building the "City of God" on Earth and to evangelize the native residents of that area.

Traveling to Chiquitos is like going back to the time of the missions at the end of the XVII century: a secret world which remained isolated for two centuries. Proof of the skills of the natives can be seen in the paintings, sculptures, music and dances that the natives learned to do to praise God.

The beauty of the religious architecture was rescued by Hans Roth, who together with a group of experts intervened to restore these amazing constructions.

The extremely high level of artistry and deep cultural sense of the work done at the Jesuit Missions motivated UNESCO to declare them in 1991 as Mankind's Cultural Heritage.

The richness of the baroque music, which is composed and performed at the missions themselves established a unique collection in America. The musical score has been kept in the Archives of Chiquitos in the town of Concepcion. There is also an International Festival of Renaissance and Baroque Music held every two years in the zone of Chiquitos.

Arriving to San Javier there are green hills and tall palm trees that stand amid the vegetation.

Moving farther along is the town of Concepcion, where visitors can find a beautiful array of orchids especially from the catleya variety. There is also a bathing resort and the Wild Life Reserve of the Black and White Rivers. In Concepcion there are also several indigenous communities that have retained there traditions.

In San Ignacio de Velasco there is a lagoon which is close to the town and it is also the starting point to travel to the towns of San Miguel, San Rafael and Santa Ana. San Ignacio is also one of the main points of entry to the Noel Kempff Mercado National Park, which has been named by UNESCO as Mankind's Natural Heritage.

The highway that connects San Ignacio with San Jose de Chiquitos leaves behind the lowlands of Chiquitos, which separates the Eastern lowlands and rainforest from the arid zone of El Chaco, and then it changes completely into a landscape with thorny vegetation and dry climate.

At 221 Km. from Santa Cruz de la Sierra lies the town of San Javier. Visitors can make the complete journey of 159 Km from San Ignacio and during the trip itself it is possible to visit San Miguel, San Rafael and Santa Ana by completing a circular circuit that connects all of these towns. From San Ignacio to San Jose de Chiquitos there is a total distance of 206. Km.

This is the first town actually founded by the Jesuits in 1691, with the name of San Francisco Javier. This was also the center of the music school which also functioned as a workshop to manufacture musical instruments.

Currently it is a small town that lives from agricultural and cattle production, and it also has a large dairy farm.

Most of the missions have been conserved as a whole, including their chapels, churches and the school patio where the bell tower has been constructed and the parish's home as well.

The church, which has a distinct baroque style, was constructed in 1749 and it was restored between 1987 and 1993. It has been declared a National Monument and Mankind's Historical Heritage. In the interior of the temple there is a museum of furniture and musical instruments that date back to the clonial times.

Just like San Javier, this town (founded in 1708) has kept its simplicity and peaceful quality which is reflected in its beautiful streets and homes made of adobe.

The main square is dominated by the presence of the mission's main church and surrounded by houses of the feudal lords built with wooden support beams. All of these constructions have retained their original look, including the mortuary chapel or bonnet, the church and the school patio where the bell tower has been built and the parish's home.

The church of the town of Concepcion de Chiquitos was constructed by Father Martin Schmid, between 1752 and 1753. The restoration was done in 1982.

The arrangement is the inverse from San Javier. The schools' entrance and the distinct bell tower are located to the left of the church called the Cathedral of the Apostolic Vicariate of Nuflo de Chavez.

The structure of the temple and the roof were built on top of 6 rows of columns: 2 of them divide the interior section into three vessels, 2 are hidden inside the walls made of adobe and the other two form the external aisles.

The Mission's Museum is open to the public and the Anthropologic Museum is located in the "Casa de Espana" (House of Spain). This second museum has an interesting collection from the Chiquitos and Ayorea cultures. From the Ayorea, there is a large collection of hunting and fishing weapons, domestic-household implements, ornaments and shoes (called "abarcas" a type of shoe very similar to slippers). From the Chiquitos culture there are hunting bows and arrows, domestic-household implements, working tools, (including an awl or boring tool used for harvesting), there are also outfits, and many other things. Some of the traditional instruments are occasionally used during the carnival (pifano) and at religious festivities (yoresox).

This is the largest town of the entire missional region. It was founded in 1749, and it is the capital of the Velasco Province. Martin Schmid finished the construction of the church in 1761. Upon conclusion of this last construction, several art and handicrafts workshops were also built which are still functioning, producing all kinds of ceramics, objects of pure missionary style, embroidery and leather objects.

Some of the main attractions of this place include the Jesuit Temple of Santa Ana and the Cathedral of San Ignacio, constructed by artisans who specialized in wood carvings. The culture of the area is promoted through the Festival of Renaissance and Baroque Music.

The church of San Ignacio de Velasco is considered to be one of the most beautiful of all the churches in the mission, mostly because of the beauty of their carvings done on wood. From the time of the Jesuits there are still several pieces which are kept in its interior. In 1998 the reconstruction of the church began under the supervision of the architect Hans Roth. His labor was done based on pictures and other documentation which were prior to the demolition of most of the structure. The construction was finished in 2001.

In the interior of the church, there are very beautiful columns made of wood and a beautiful main altar with a series of carvings which are of Post-Jesuit and Rococo style.

Located at 40 Km. from San Ignacio, this town was founded in 1721 by Father Felipe Suarez. This town gathered several Indian tribes and became quite prosperous.

At the moment this group is located on an elevated set of stairs, built in 1760. The paintings of San Pedro and San Pablo can be seen on the facade. Both have been beautifully framed with designs of plants and flowers which extend into the interior and the patio of the main construction. The main altar piece, located on the back wall, is surrounded by elegant Solomonic-style columns and a smaller temple which is placed slightly forward from the main section. There are also images of San Pedro, San Pablo, San Rafael, the Holy Virgin and San Gabriel.

This town is located Southeast of the Province of Velasco, on the shores of the Gaubys River. San Rafael was founded in 1696, and it used to be the center of communications of the mission.

The construction of the church was ordered by Father Martin Schmid and this was the first work that he had ever done. At this spot there are several pieces of art including pieces made of silver and it is believed to have been one of the first places where art pieces of precious metals were made in this particular region.

This is one the last missions in Chiquitos. It was founded in 1755, 12 years before the actual expulsion of the Jesuits. The construction of the church was conducted by the indigenous residents themselves under the supervision of the priests. As a result, visitors can now see a building that has a very pastoral look; it is of reduced proportions in comparison to the other constructions, but still very striking. It is surrounded by houses of the small village. The actual custody of the temple is considered to be a great honor passed on from father to son.

This construction has been recently repaired. The church has a structure made of wood with a very traditional design. The stairs on the sides, the balconies of the higher portion of the building and of the entrance provide access for the choir.

The cluster of missions of San Jose has been the only one that has been constructed on stone slab and lime.
To this day, San Jose is a commercial town which is located on the train line that connects Santa Cruz de la Sierra to Puerto Suarez.

Towards one side of the main square there is a row of all the portals, mainly the mortuary chapel, the bell tower, and the school. The decorative details and the burnt ocher color of the stone provide a particularly suggestive appearance to the place.

The portal of the church has a certain decor done with a checkered design over rubblework which covers the pillars and the wainscot. The pulpit is absent and the confectionaries have a less detailed style of carving.

The National-Historical Park "Santa Cruz la Vieja" is located at 5 Km. from San Jose de Chiquitos. This is a protected area that has a total surface of 17,080 hectares. It includes the place where Santa Cruz de la Sierra was first founded in 1561. It has kept the original design of the city, which at one time used to have 32 blocks of homes and in the center a large stronghold or fortress.

Activities for the visitor

Recommendations and when to visit

The best time of the year to visit the Missions is during Easter, during some of the parish festivities or during the Festival of Renaissance and Baroque Music which takes place every two years. 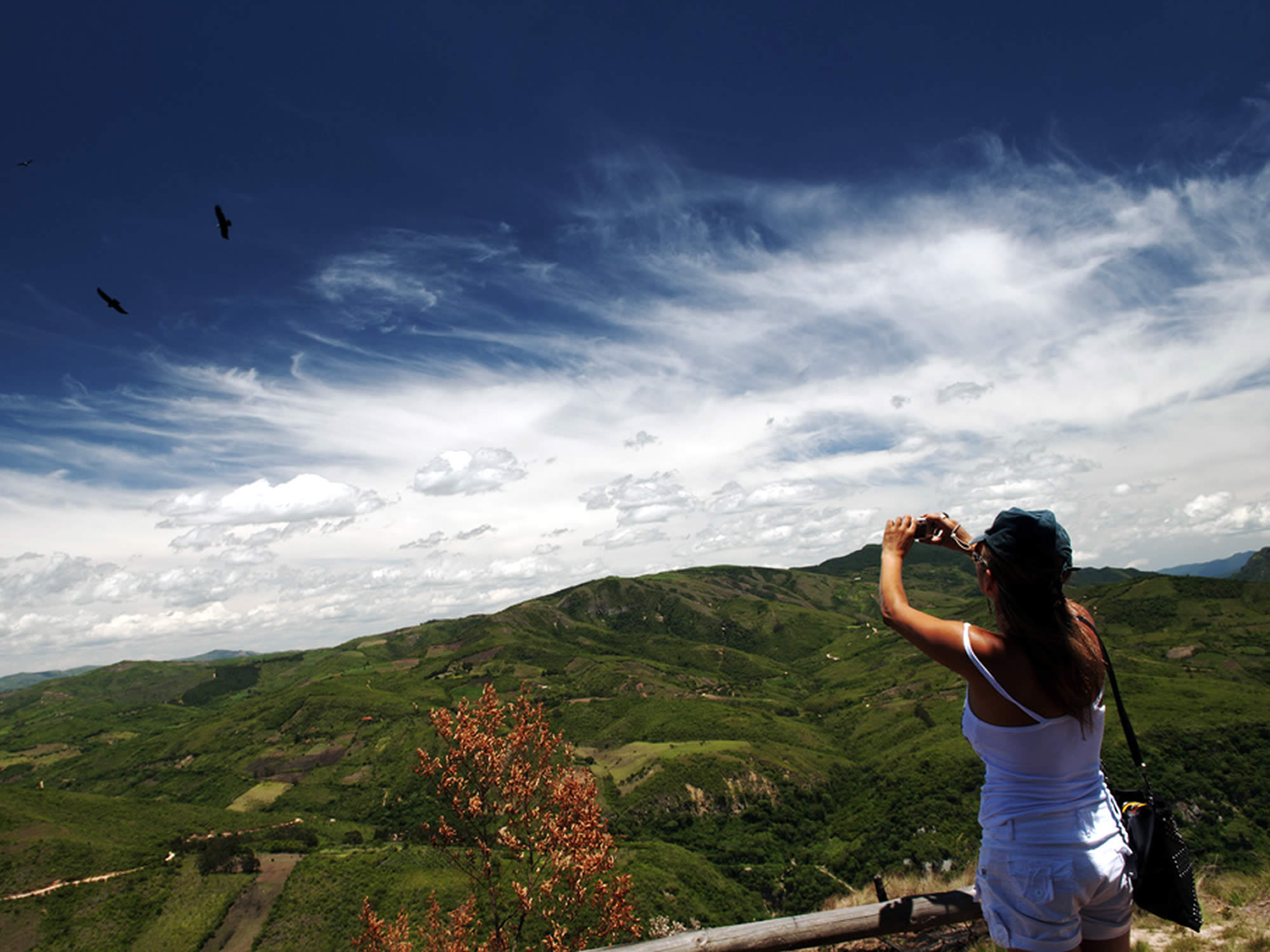