Update: All tourist sites and attractions are open to visitors.

Located in the hearth of South America, Bolivia is a unique destination for travelers looking for an authentic cultural experience. Even though Bolivia is one of the least-developed countries in South America criminal statistics are quite low.

Travelers can enjoy a pleasant and safe stay in most of the tourist spots in Bolivia.

Most major cities in Bolivia have "Medium" threat ratings for crime, while Santa Cruz de la Sierra remains as the most dangerous city in Bolivia. Violent crimes such as assault and robberies against foreigners are statistically low but do occur. In general, if tourists take basic security precautions, they may walk the streets in most areas of major cities without becoming victims of crime.

We strongly advise against taking unplanned taxi rides from El Alto International Airport to La Paz city if your flight arrives early in the morning (1a.m. to 7 a.m.). It is best to schedule private transportation from trusted providers. We recommend you to travel directly from El Alto Airport to La Paz city and do not stop in El Alto for any reason. El Alto city is dangerous at night, ask your driver to go straight to La Paz city without any stops. In case of demonstrations, it may become difficult to reach El Alto airport.

Other airports in Bolivia handle mostly domestic flights and the arrival and departure times are during the day, so travelers do not have to worry about their safety.

Tourists are easy targets for pickpockets in Bolivia and criminals are becoming bolder and more cunning, using some very creative ways to separate you from your money. Here are some of the ways you could lose your money in Bolivia:

Purse snatching. If you carry a purse, handbag or backpack strapped over just one shoulder, hang it on your chair at a restaurant, or set it down on the ground near your feet for any reason, you could become the victim of a purse snatcher. No matter how safe an area seems to be, and no matter how friendly the people around you seem to be, don't do this. Instead:

When you are in busy areas such as malls, movie theaters, markets, buses and busy streets always carry your money, wallet or purse in front of you or safely inside your clothing (money belt, satchel around your neck and under your shirt). This makes it difficult for pickpockets to get to it. In addition, in Bolivia thieves often carry small razor blades or knives which they use very deftly and silently to slash your purse or bag. Although they may attempt to reach in to steal your belongings, often they'll simply follow you picking up your belongings as they slip out.

Outside the major cities, road conditions are hazardous. Many roads are not paved, and the remainder is topped with gravel or dirt. The majority of roads can be quite dangerous during the rainy season (December-March), when rock slides and road and bridge washouts are common. Many winding stretches of road travel through insufficiently lighted mountainous areas, without the benefit of guard rails, traffic signs, and designated traffic lanes. The mountainous areas pose even greater challenges to road travel, with weather conditions varying from blizzards to heavy rain storms, and narrow, unpaved roads, which are frequently blocked by rock and mud slides.

The general disregard for traffic laws makes driving particularly dangerous. Pedestrians also pose a hazard, with a general inattentiveness to traffic. Accidents involving pedestrians, cyclists, and motorcycles are common in both urban and rural areas.

The North Yungas road, which runs from La Paz northeast toward Coroico and Caranavi, has earned the dubious designation of "The World's Most Dangerous Road" and has become a hub for thrill-seeking mountain cyclists. Press reports are filed weekly concerning accidents along the road, usually involving buses and multiple fatalities. The better alternative, "Carretera Cotapata - Santa Barbara", better known as "Carretera nueva a Coroico" should be used.

Many of the roads north of La Paz that pass through Guanay, Mapiri, Consata, Apolo, and Sorata are extremely dangerous due to landslides and narrow roadways traversing sheer cliffs. Compounding this, these roads are lightly traveled, and motorists involved in accidents or encountering mechanical problems often find themselves miles from the nearest village, with little hope of assistance from infrequently passing motorists.

Many of the roads in the province of Beni have fast moving streams and rivers that cross roadways.

Travel along less-utilized routes is considered dangerous due to poor roads, reckless drivers, and poorly maintained buses and trucks. Added dangers are the lack of formal training for most drivers, lack of lights on vehicles at night, and drunk or overly tired drivers, including commercial bus drivers. Most roads are rarely patrolled by police and have many isolated stretches between villages. Consequently, traffic accidents and vehicle breakdowns are particularly hazardous.

Interdepartmental public transportation is poor, except along the more frequently traveled routes where roads have been upgraded and maintained (i.e. La Paz to Cochabamba, Cochabamba to Santa Cruz, and La Paz to Oruro). Bus service along these routes is generally safe, although accidents, with fatalities, occur from time to time.

Thefts from vehicles are a significant and pervasive problem. Unattended vehicles are broken into and computers, spare tires, stereos, headsets, and other items of value are often stolen. Such crimes are no longer exclusive to business and shopping districts; they occur in residential areas as well. Carjacking and vehicle theft remain the most common crimes in Santa Cruz.

The rainy season is from November to March. Landslides, impassable roads and flooding are a regular occurrence and can make road travel extremely difficult. In the event of severe flooding and landslides, transport may be disrupted for longer periods and airports can be closed. If you plan to travel to an affected area, you should monitor local media, confirm your transport arrangements and follow the advice of local authorities.

Student, labor union, and indigenous protests against government policies are a regular feature of political life. Demonstrations, road blocks, protests, and other forms of civil unrest are common in Bolivia, especially in the main cities of La Paz, Santa Cruz, and Cochabamba. While disruptive, especially to transportation, violence is usually limited and localized. Protesters often block city streets and highways, and public transportation tends to be disrupted.

Protesters also occasionally burn tires, throw Molotov cocktails, engage in destruction of property, and detonate full or half sticks of dynamite during demonstrations, but fatalities as a result of protests have been rare. Some communities have used protests and strikes successfully to obtain promises of increased government spending on social benefits and infrastructure. Travelers are normally only affected indirectly by having to contend with traffic disturbances and transportation stoppages.

Travelers should avoid roadblocks and demonstrations. Demonstrations, violent protests and strikes can occur at any time and may seriously affect domestic and international travel plans without notice.

Roadblocks: Roadblocks are common in Bolivia. If you find yourself at a roadblock, you should not attempt to run through it, as this may aggravate the situation and lead to physical harm. Instead, you should consider taking alternative, safe routes, or returning to where the travel started. If you plan to take a road trip, be sure to monitor news reports and contact us for updates in the situation.

Travelers are advised to excercise a high degree of caution due to continuing political and social tensions in Bolivia.

You should organise comprehensive travel insurance and check what circumstances and activities are not covered by your policy.

Bolivia is known as a country where tourism involves a lot of outdoor activities in high mountains and valleys, and the country's numerous national parks are among the top tourist attractions. Suffice it to say that ecotourism, adventure tourism and hiking are big in Bolivia. If you're planning to spend some time in Bolivia's wild remote regions, read these safety tips for hikers.

Express kidnappings: this has taken place numerous times in La Paz and is very dangerous. Small groups of criminals will approach a tourist or foreigner and force them into a car. (Sometimes they'll enter a taxi you've entered). They then drive the tourist to an ATM and force them to withdraw from their account. The tourist is then dumped somewhere and they leave. However, on some occasions, express kidnappings have resulted in deaths. Resisting or fighting can result in serious injury at the very least. Give them your money if it will save your life.

If you have just entered a taxi and someone else begins to enter it, get out immediately! Taxi sharing is not common in Bolivia. Don't share! If you're already driving along and your taxi driver wants to pick up someone else along your route, say no! If he/she insists, get out immediately. Don't hesitate to look for money to pay for the partial ride you already got. The taxi driver has no right to pick up anyone if you've said no and being insistent is NOT normal.

Bolivia is a safe country with low occurrence of violent crimes. However there are some important things to pay attention to:

Leave valuables in a safe place in your hotel. It is not recommended to be carrying your passport or large sums of money, only what you need for the day. Don't carry with you credit or debit cards or credentials unless you wish to use them. Carrying a photocopy of your passport is usually acceptable.

Bolivian police will never approach you. Also, they almost never work alone. If a policeman approaches you, he is almost certainly a criminal with a fake uniform. Never follow or get into a taxi with him unless you can be absolutely certain that he is indeed a policeman.

Be vary of purse snatchers especially near markets and tourist areas. Don't keep valuables in your purse, pockets or external compartments of your bag. If someone tries to distract you in a crowded place, get out of there.

Don't try to resist armed criminals. Give them your money and leave.

Always use a radiotaxi from a reliable company. Don't take normal taxies at night, especially if you have been drinking. La Paz is notorious for its fake taxies that look for drunk tourists.

Don't appoach protest. These are common in Bolivia and should be avoided even if they are usually not violent. Protestors often throw fireworks and sometimes explosives. Some may not like being photographed.

Be careful at bus terminals, as there are many pickpockets. Take care when meeting people at the terminal. Criminals may pose as travellers and try to convince you to get into a taxi with them.

Unfortunately there are some travelers who use drugs in Bolivia. Doings so not only undermines the civil order in Bolivia by helping criminal groups, but also exposes you to robberies. Bolivian law carries very severe sentences for the use and trafficking of drugs. Foreign citizenship will not protect you from the bolivian justice system.

It is best not to walk alone at night, especially near bus terminals or dark places. 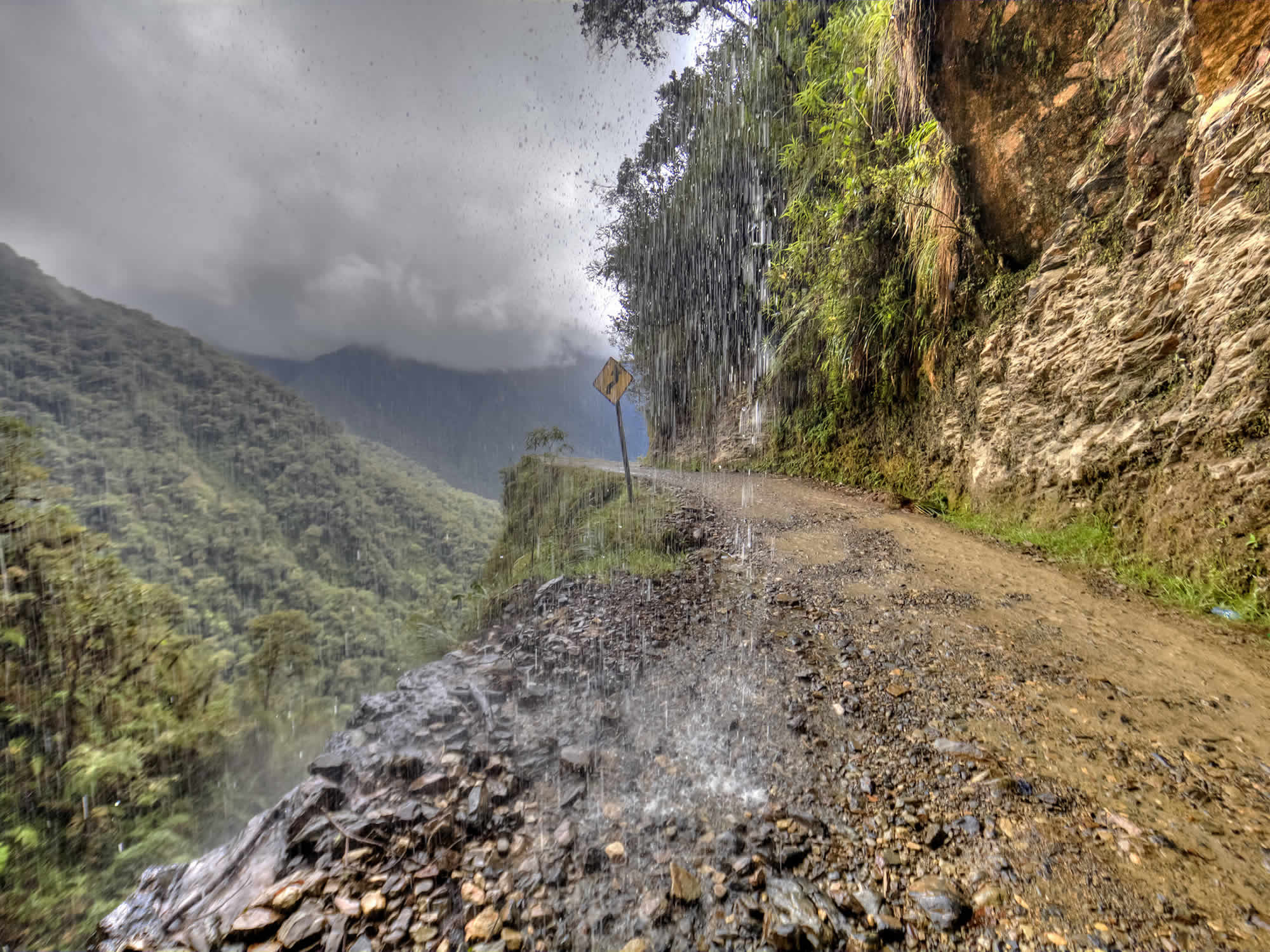