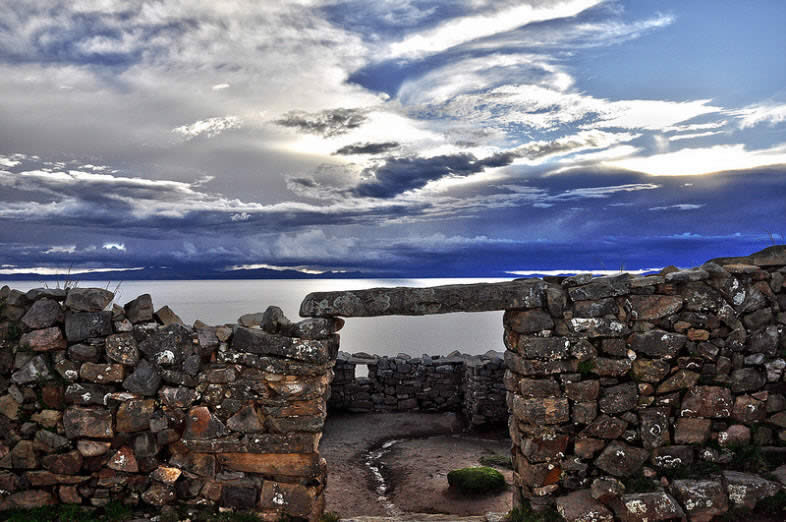 You will travel in a comfortable tourist bus accompanied by a tour guide towards Copacabana town.

About 70 kms from La Paz, you will start seeing the majestic Titicaca Lake. The bus will make a short stop so that you can take pictures of the lake and the beautiful andean landscape.

You will cross the Tiquina straight in a boat. The crossing takes about 20 minutes and the passengers must disembark from the bus and cross the straight separately for safety reasons. Please carry your wallet and identification with you.

On the way to Copacabana town, you will get even better views of Lake Titicaca, the local vegetation and the typical animals of the andean highlands. You will see scenic villages and the locals during their daily activities such as llama herding terrace agriculture.

After about a 3.5 hour trip, you will arrive in the mystical town of Copacabana, full of legends and indigenous as well as mestizo history. You will be accomodated in Hotel Rosario del Lago Titicaca and have lunch.

In the afternoon you will tarvel to the Sun Island (Isla del Sol) on a shared boat. The trip takes about 45 minutes. According to legend, the founders of the Inca Empire emerged from this Island sent by the sun god Inti to teach humanity civilization.

You will visit the Garden of the Inca and the Yumani stairs. On the top, you will find the three waters fountain, a testament to the hydraulic skills of the pre-hispanic people.

The main tourist attraction is the Pilcocaina palace where the Inca used to stay when he visited the island. All the openings in the construction are orientated towards the sunrise.

You will return to Copacabana and to the hotel Rosario del Lago Titicaca from where you can observe the beautiful sunset over Lake Titicaca.

The day begins with a delicios buffet breakfast in the hotel, made from typical andean ingredients to fill you with energy for the day.

First, you will visit Copacabana church, where the Candelaria Virgin also known as Morena Virgin is kept. This imponent basilica was completed in 1640 and is visited by thousands of pilgrims each year. You will walk the small streets of the town and visit the local market where you can buy the famous pasankallas, the sweet andean popcorn.

In the afternoon you will return to La Paz.