Air travel in Bolivia is full of surprises. Get helpful advice about what to expect when getting on a plane here! 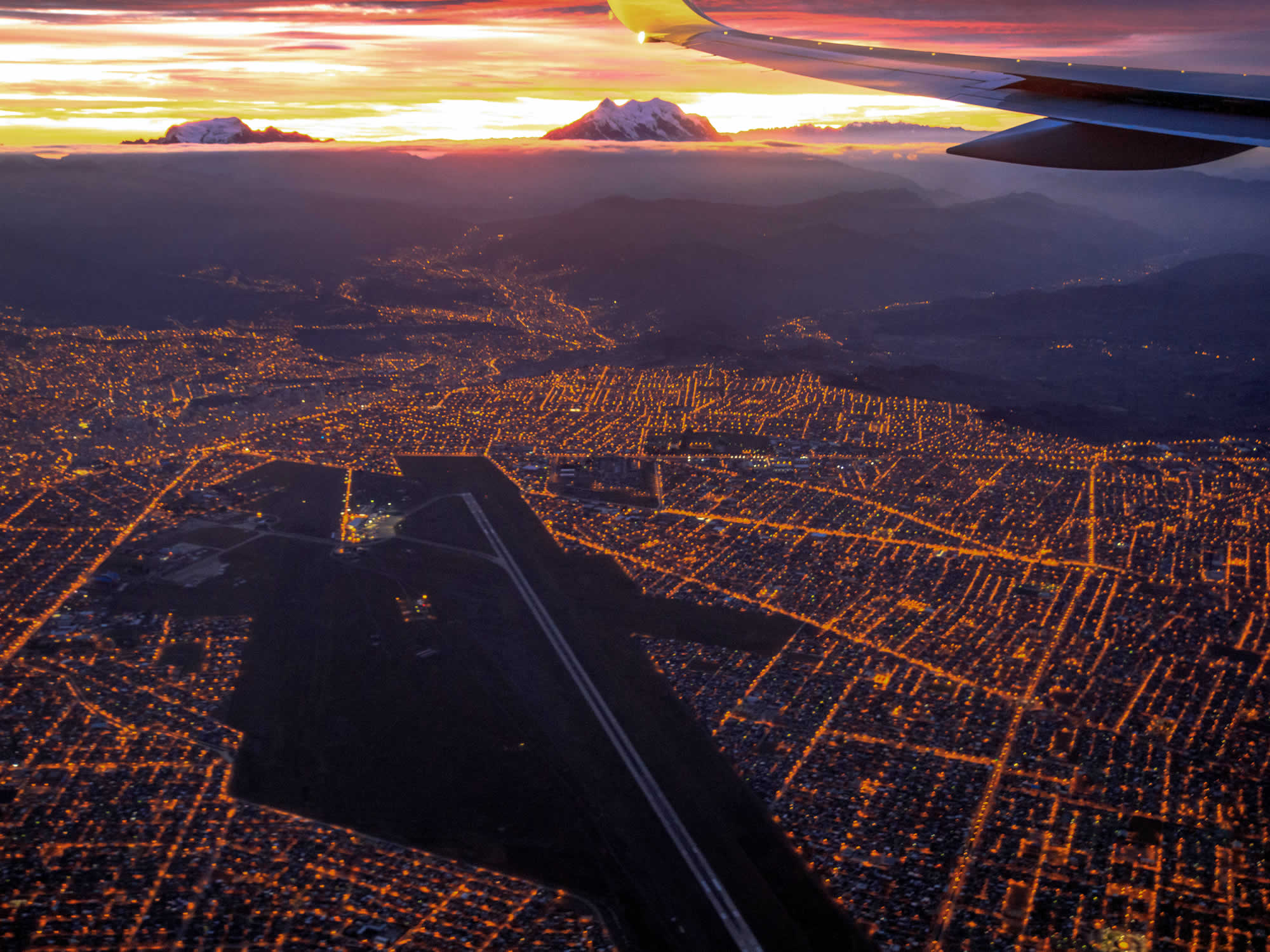 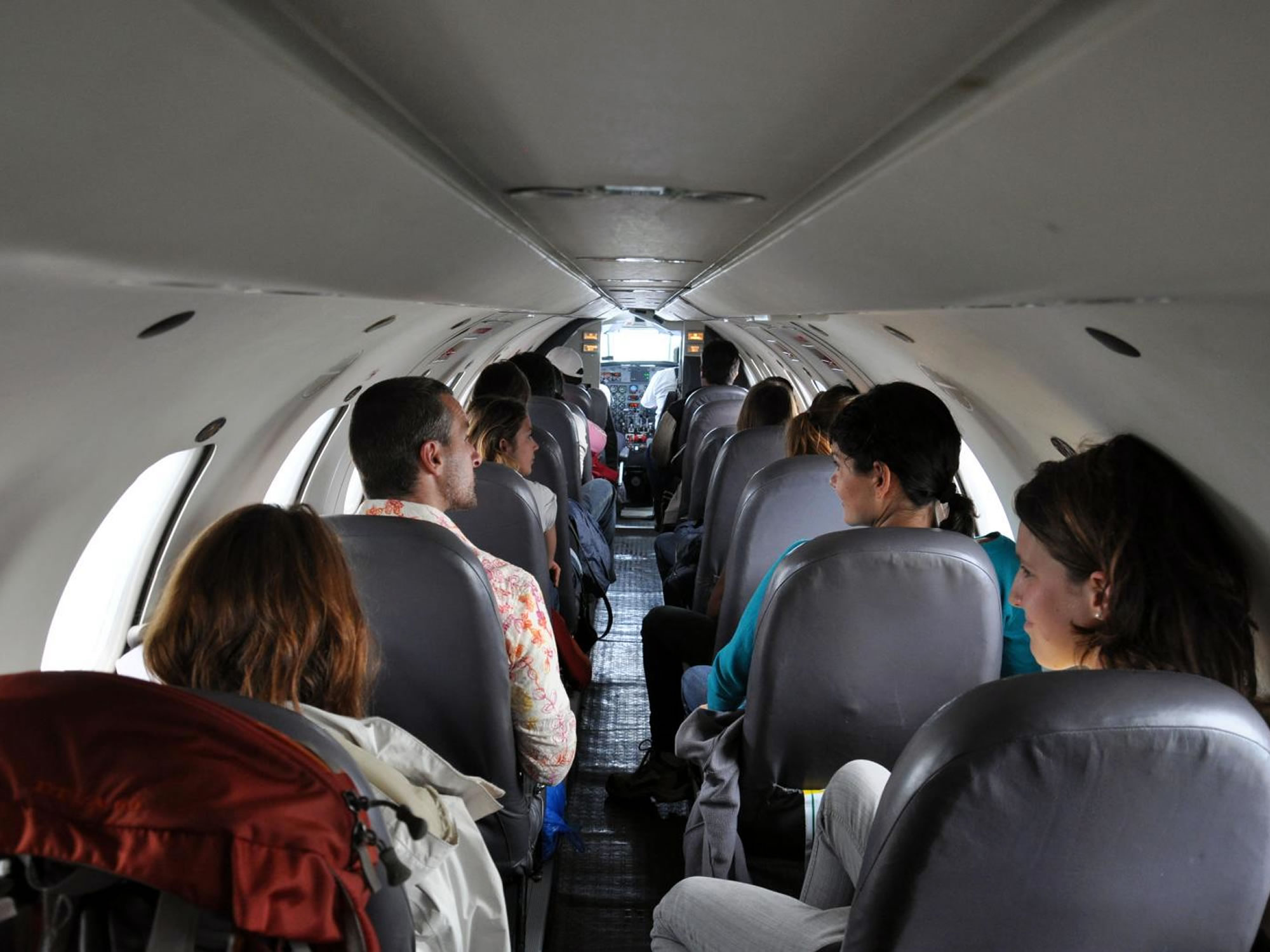 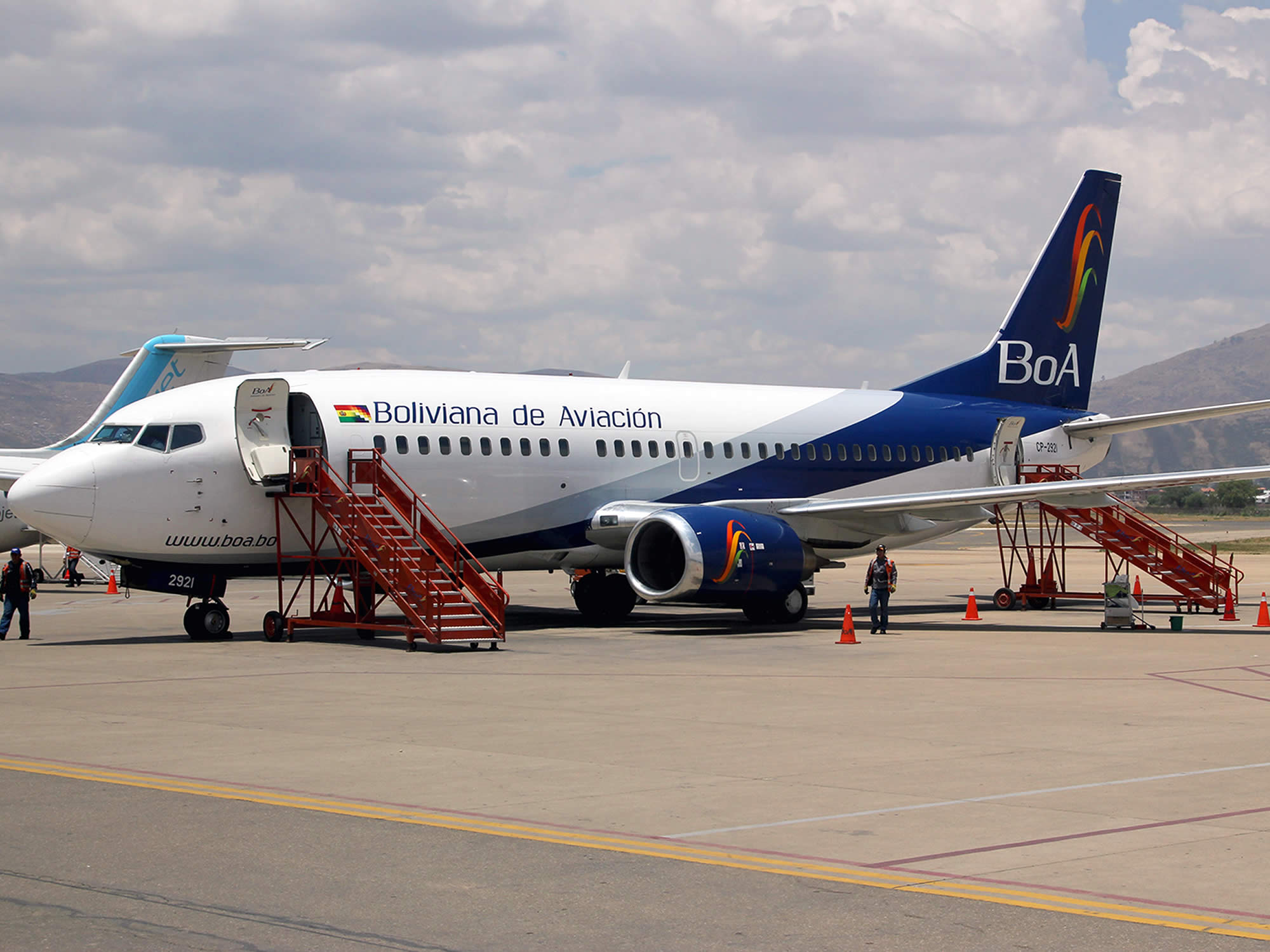 Bolivia's topography, size and lack of basic infrastructure means that getting around is often a challenge. Air travel is a great way of saving a day or two of arduous cross-country travel, and most of the major cities are served by regular internal flights. Also, the majority of Bolivia's road network is unpaved, and most main roads are in a poor condition. These roads, most of them badly maintained dirt roads, lead from the Amazon basin (average elevation 400 feet) up to an elevation of 10,000 to 15,000 feet and are mostly frequented by cargo trucks.

Traveling up or down the Andes in Bolivia by road can be very dangerous, and flying is definitely safer. Avoid travel by land in the Amazon basin during the rainy season (October through April), when dirt roads turn into mud. Flying is your best option during this time, and it is also relatively inexpensive, with most internal flights costing Bs. 350 - 700.- (USD50 - 100), and offers splendid bird's-eye views of the high Andes or the endless green expanse of the Amazon.

The approximate journey times and frequencies of all services given in official timetables should be treated with caution to say the least: the idea of a fixed timetable would strike most Bolivians as rather ridiculous.

La Paz, Santa Cruz, Sucre and Cochabamba are all connected by daily flights, and there are also frequent services to Tarija, Trinidad and a number of remote towns in the Amazon and the Eastern Lowlands.

The main carrier is currently the state-owned Boliviana de Aviacion. A smaller operator, Amaszonas operates flights from La Paz, Cochabamba and Santa Cruz to the main towns in the Bolivian Amazon, along with some international routes to neighbouring countries.

Flight times are often limited and delays/cancellations are common, so it's best to book well in advance and to reconfirm the day before departure.

The Bolivian air force also operates passenger services under its commercial arm, Transportes Aereo Militar. TAM is often cheaper and flies to some out-of-the-way places not served by the others. Flights are often cancelled or delayed, and sometimes even leave earlier than scheduled, especially in the Amazon, where the weather can be a problem. Baggage allowance on internal flights is usually 15kg, with an additional charge payable on any excess.

Some particularly remote regions, such as the Parque Nacional Noel Kempff Mercado, are also served by light aircraft, which are an expensive but exciting way to travel.

Taking a flight in Bolivia has some peculiarities that travellers from other countries need to be aware of.

Amaszonas airlines require you to "reconfirm" your booking 24 hours before the flight, otherwise they will simply re-sell your seat and move you to a later flight. It is easy to forget to do this reconfirmation while travelling, so it is better to have a travel advisor take care of your flight bookings for you in Bolivia. 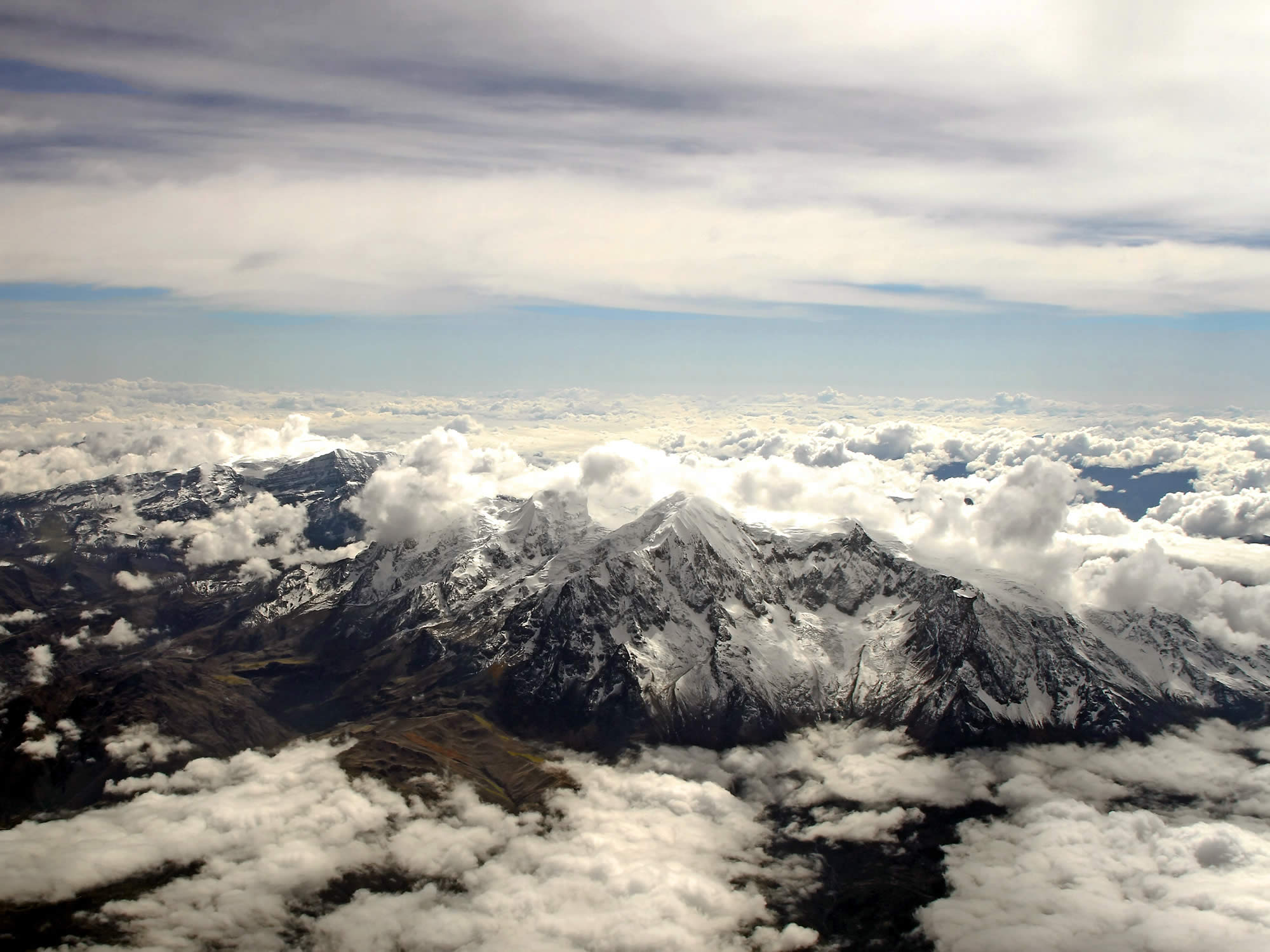 As Amaszonas airline's flight frequencies to Uyuni increase and decrease based on demand, they often move passengers from one flight to another without asking them whether they would like to change flights or not.

Or a flight can be cancelled and passengers are moved automatically to another flight.

We therefore recommend caution when taking international connections based on Amaszonas timetables.

BOA airline often changes and even brings forward departure times. They are still a relatively new airline and they keep adjusting their operations.

We strongly recommend contacting whichever airline you are taking two days before your flight to make sure there have been no changes to the schedule.

Amaszonas is more punctual than BOA and its fleet is more modern. The average age of BOA aircraft is 30 years and there are even some planes where a number of seats have no seatbelts!

In case you have troubles at the airport, you may present a complaint called ODECO against the offending airline. There is an ODECO office in every airport.

BOA currently has only two flights per day to Uyuni: one in the morning at 08:10 and the other in the evening at 19:00 hrs.

A number of times the airlines leave your baggage behind and it does not arrive with you to Uyuni. This is mainly due to excess weight in the cabin. It also means that your luggage will arrive with the next scheduled flight, leaving you stranded without clothes and other items.

In the case of Amaszonas, having 4 flights per day means passengers need to wait between one to four hours for their luggage. When travelling with BOA, passengers will only be able to recover their luggage in the evening if they took the morning flight. In the unfortunate case of having your luggage left behind when taking the evening flight, you will need to wait until the next morning to get it back.

This situation is extremely detrimental to passengers. Tour schedules are almost inevitably affected.

Only a handful of US and European airlines offer direct flights to Bolivia, so airfares are high. There are direct services to most major South American cities and the flights to/from Chile and Peru are the cheapest. Santa Cruz is an increasingly popular entry point from Western European hubs. Due to altitude-related costs, it is more expensive to fly into La Paz than Santa Cruz. High season for most fares is from early June to late August, and from mid-December to mid-February.

There are currently 13 airlines offering international flight services in Bolivia:

Many airlines are shifting their operations from La Paz to Santa Cruz, mostly due to costs and efficiency. From the 4th of July, 2018 American Airlines will stop operating from La Paz and will instead fly to Miami from Santa Cruz.

Departure taxes vary according to the airport and destination. Most are included in ticket prices but some are to be paid at the airport. Domestic departure taxes range from Bs. 11.- to Bs. 15.- International departure tax is USD 25. Some airports also levy a municipal tax of up to Bs. 7.- You should consult a travel advisor to know if and how much airport tax to pay. 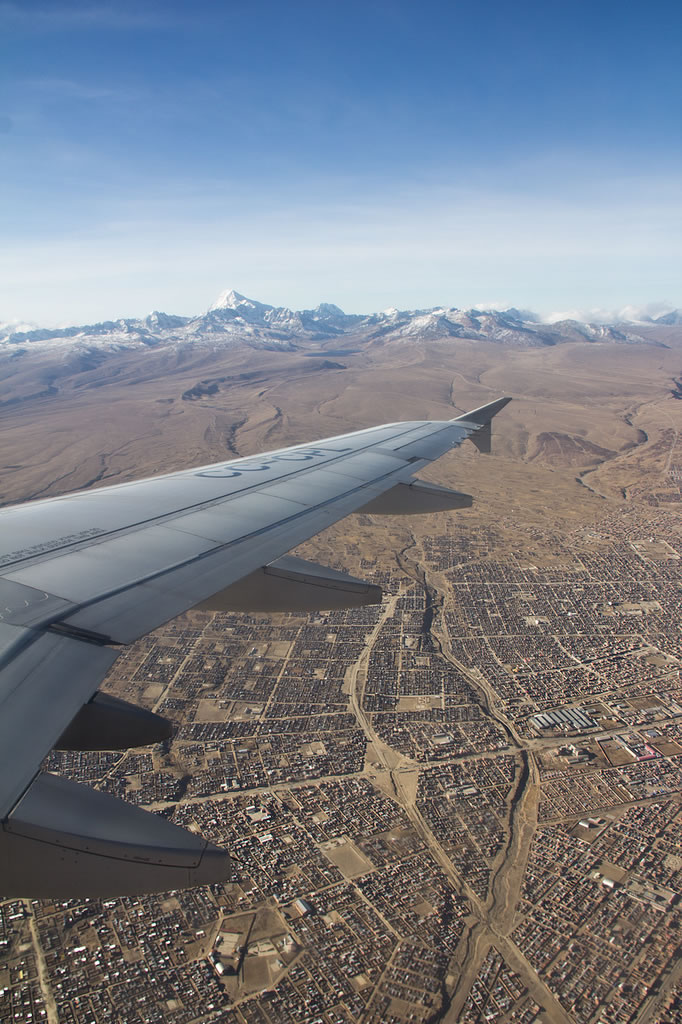