Thanks to its majestic carnival, Oruro is recognized as the folklore capital of Bolivia. 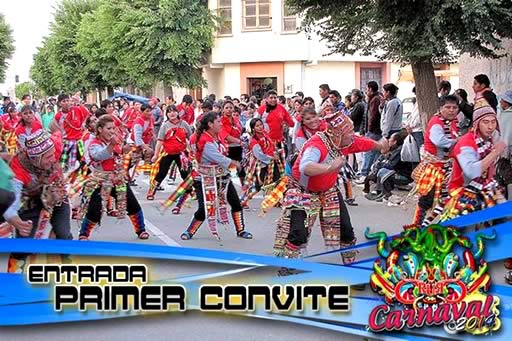 The Lavish Oruro Carnival takes place in the departament of Oruro, located al in west Bolivia in the central highlands of the Andes montain range. The topography of Oruro is characterized by mountains and y highlands with a clod climate most of the year.

Reserve your hotel for the Oruro Carnival!

Thanks to its majestic carnival, Oruro is recognized as the folklore capital of Bolivia. The 18th of May, 2001, the UNESCO declared the Oruro Carnival as part of the "Oral and Intangible Heritage of Humanity".

The Oruro Carnival is a distinctly religious festivity in devotion to the Virgin of Socavón. Every year folkloric dance groups from all over Bolivia and the world meet up in Oruro to play tribute with their music and dances to the Virgin of Candelaria also known as Socavón. The dancers make a journey of several kilometers, culminating at the Sanctuary of the Virgin to whom they offer their dance as sacrifice in exchange for the granting of a wish.

As the main expression of Bolivian folklore "The Majestic Oruro Carnival" takes place along the Folklore Avenue (Avenida 6 de Agosto). Along this avenue stairs are set up on both sided from where the joy of the folkloric dance groups and bands can be appreciated.

Origin and Evolution of the Oruro Carnival 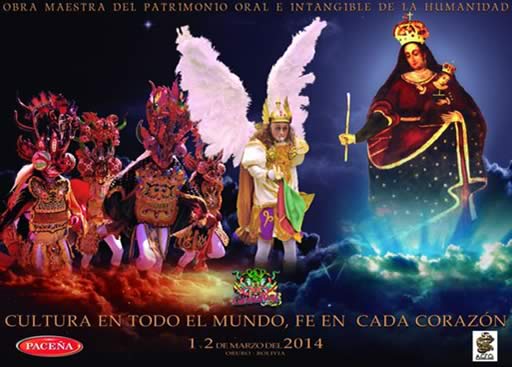 The Oruro Carnival originates in ancestral andean invocations to the Pachamama (Madre Tierra), Tio Supay (Diablo) and the Virgin of Candelaria.

To understand how the Oruro Carnival evolved, we take a look at the 5 periods of its development.

First period, from the aparition of the image of the Virgin of Candelaria in 1789, and its posterior revelation in a cave of the hill "Pie de Gallo". Legend says that in an abandoned mineshaft of this hill lived a thief called Anselmo Selarmino (the Nina Nina or Chiru Chiru) who stole from the rich and gave it to the poor. In one of his nighttime adventures he was mortally wounded by a worker from whom he wanted to steal his only treasure. In his agony he was carried by a maiden from the village to his hideout. The next day, the miners found his lifeless body guarded by the beautiful image of the Virgin of Candelaria.

Second period, the miners, having discovered the virgin, decided to revere her during three days of the year, beginning frommthe saturday of the carnival and using devil-like costumes and captivating music. Since then, the Entrance of Shipments and Candles is held with religiuos ornaments, silver presents, meals and drinks for the Patrona.

Third period (1900 to 1940) The first Comparsas or Fraternities are bornd, devoted to the Virgin of Candelaria. It is like this that troops of Devils, Morenos and Tobas dance towards the old Chapel of Socavón in extasis from chicha and alcohol. At this time women and children do not take part.

Fourth period (1940 to 1980) Putting aside prejudice, business employees, banks, teachers and even soldiers joined the Carnival and made marked innovations to the original entrance.

In 1963 the Commission for the Defence of Folkloric Ensambles is founded and in the theaters the original "tale" of the Diablade and the fight between good and evil is portrayed based on the work of the writer Rafael Ulises Peláez.

In 1970 the government declares Oruro city as the "Folklore Capital of Bolivia". The music bands increase their creativity and the travel of groups of Diablada is promoted to the interior and exterior of the country. Other ensambles begin to appear and the involvement of young people and women begin to be more massive.

Fifth period, from the 80-ies till today, is a period of splendor with the spectacular presentation of women, the show of costumes and the splurge of youthful beauty. For the first time a study is conducted to present the carnival as patrimony of humanity to the UNESCO.

Finally on the 18th of May, 2001, the UNESCO declares the Oruro Carnival as "Oral and Intangible Heritage of Humanity".

The bolivian people identify themselves greatly with its dances, folklore and tradition. Today, new generation make up the fraternities of dancers, lending continuity to the famous Oruro Carnival, as well as the other folkloric entrances in other departments of Bolivia.

Articles related to the Oruro Carnival 2014:

Tour packages for the Oruro Carnival 2014

Accomodation for the Oruro Carnival 2014