This high-altitude desert spans an area of over 7000 square kilometers in the south-western corner of Bolivia, bordering Chile and Argentina, in an extremely remote location but not too far from the famous Salar de Uyuni. 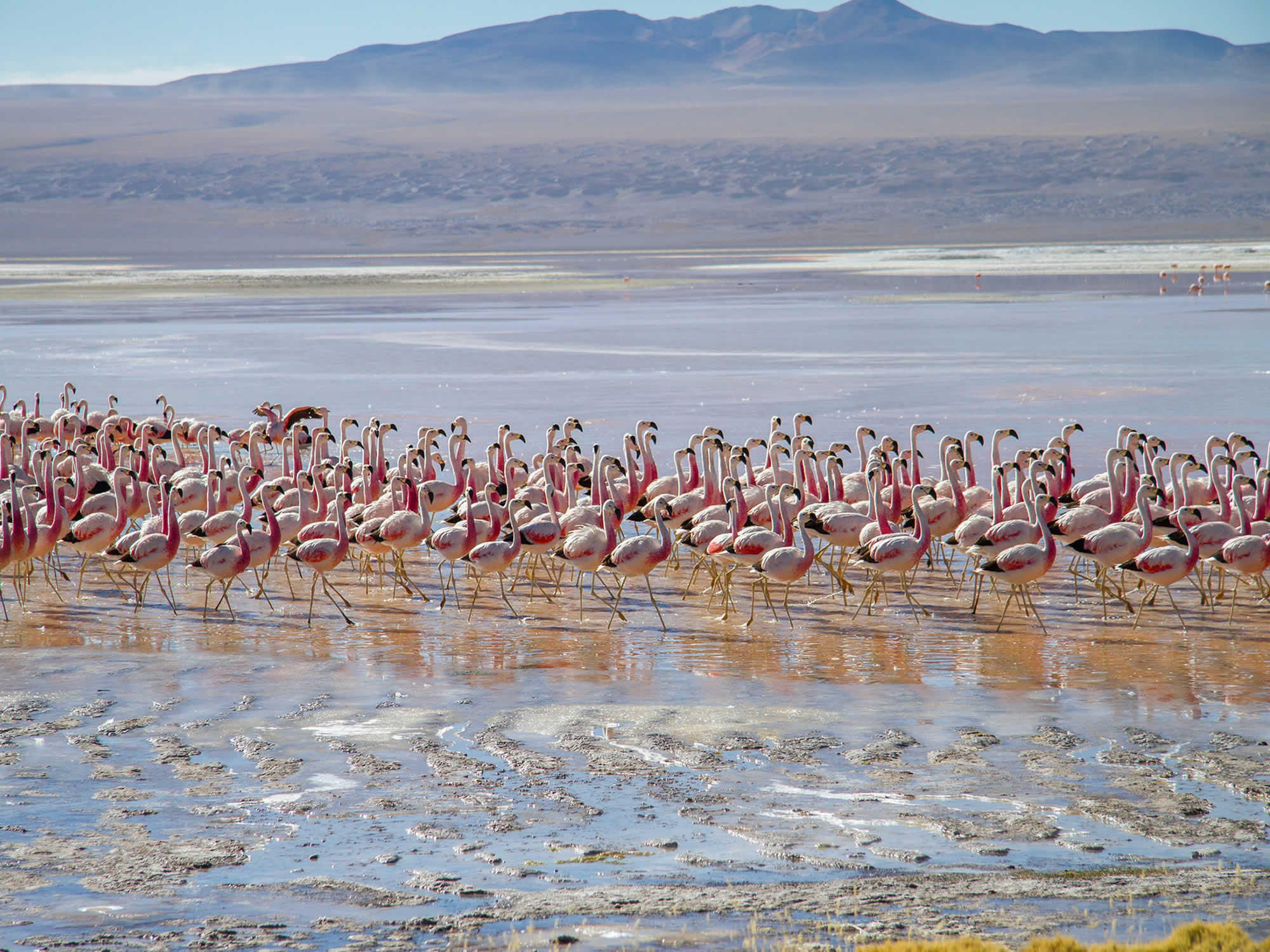 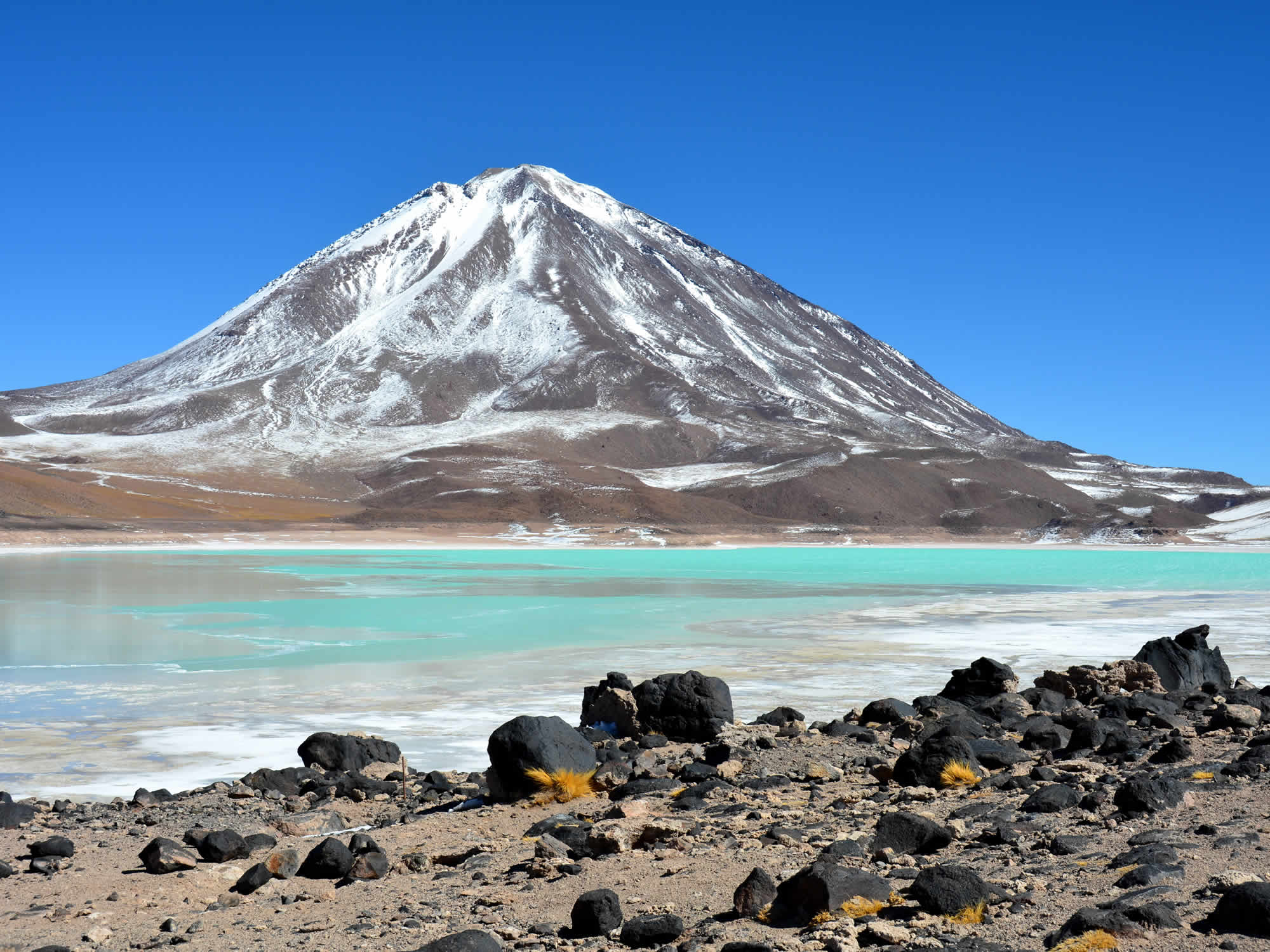 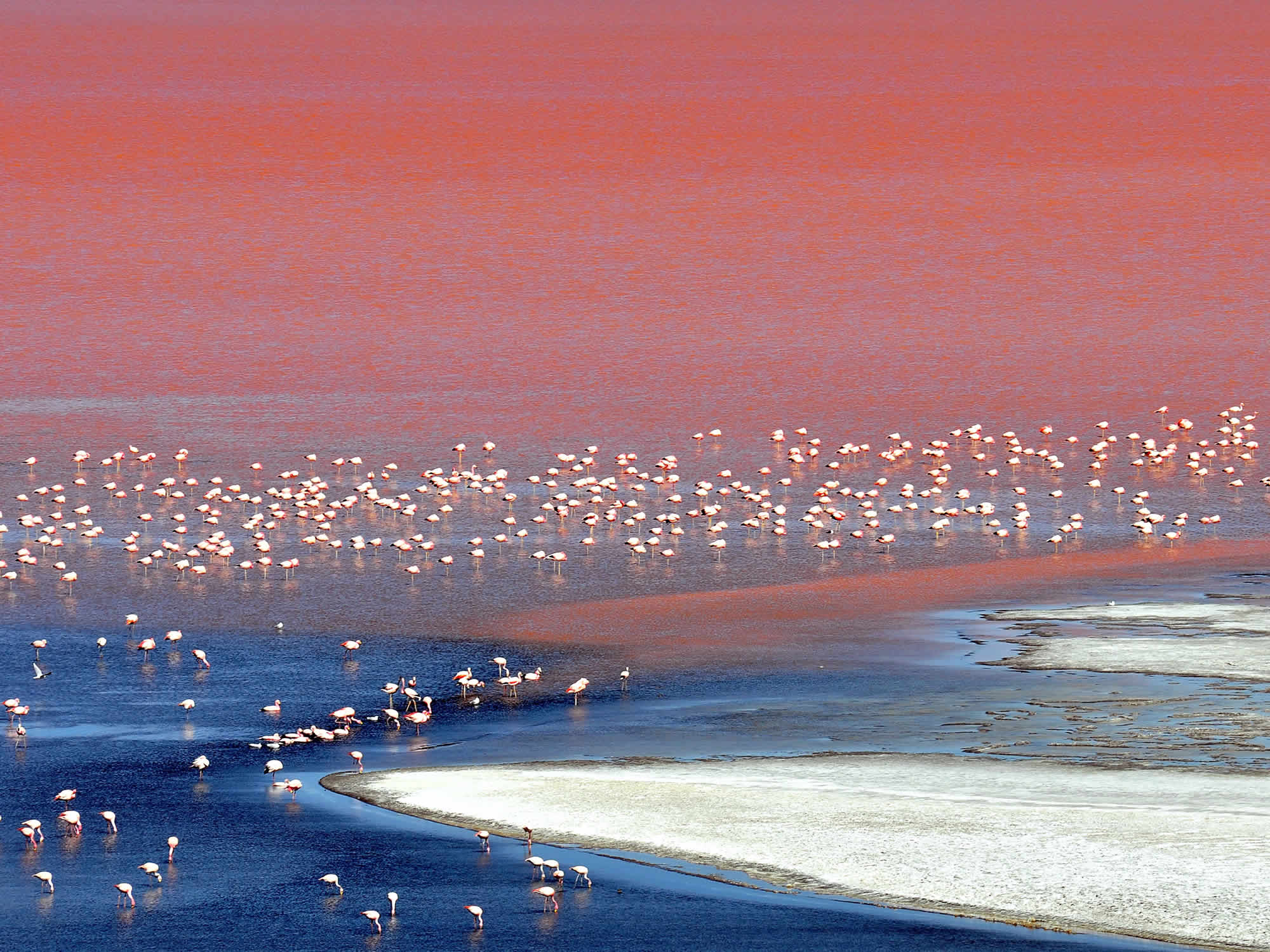 Everybody knows about the great salt flats of Bolivia, the Salar de Uyuni, but few know about the Eduardo Avaroa National Reserve.

Created in 1973 to protect the fauna, wildlife and indigenous residents, the Eduardo Avaroa National Reserve with its striking landscapes is one of Bolivia's most popular parks.

A rainbow of lakes, twisted rock pillars, alien vegetation, plumes of hot steam, pink flamingos and colorful volcanoes stun the senses. The Reserve is basically a tropical Iceland and a must-see highlight of the Andes.

This high-altitude desert spans an area of over 7000 square kilometres in the south-western corner of Bolivia, bordering Chile and Argentina, in an extremely remote location but not too far from the famous Salar de Uyuni. The reserve lies at 15,000 feet on the Altiplano (high plains) of the Andes, which is the world's largest area of high plateau outside Tibet. The rugged mountains in the reserve are among the highest in the Andes, and go up to 6000 meters.

How to get there?

Most people fly into La Paz then either take another flight or a tourist night bus to the city of Uyuni.

To visit the Eduardo Avaroa Reserve you will need to get on a tour. Be aware of the very high altitude here, which starts at 4600 meers and ends at 4970 meters.

The entrance to the reserve is about a 160 km drive south from the southern shore of the salt flat.

When is the best time to go?

The climate is dry and cold all year round. In winter (May to August), and summer (December to April) temperatures average 3 °C (37 °F).

Named after Colonel Eduardo Avaroa, Bolivia's hero of the War of the Pacific, the reserve is known for its lakes of outlandish colours, weird rock formations, thermal springs, geysers and semi-active volcanoes.

The Daliesque landscape is extraordinary and completely worth savouring. 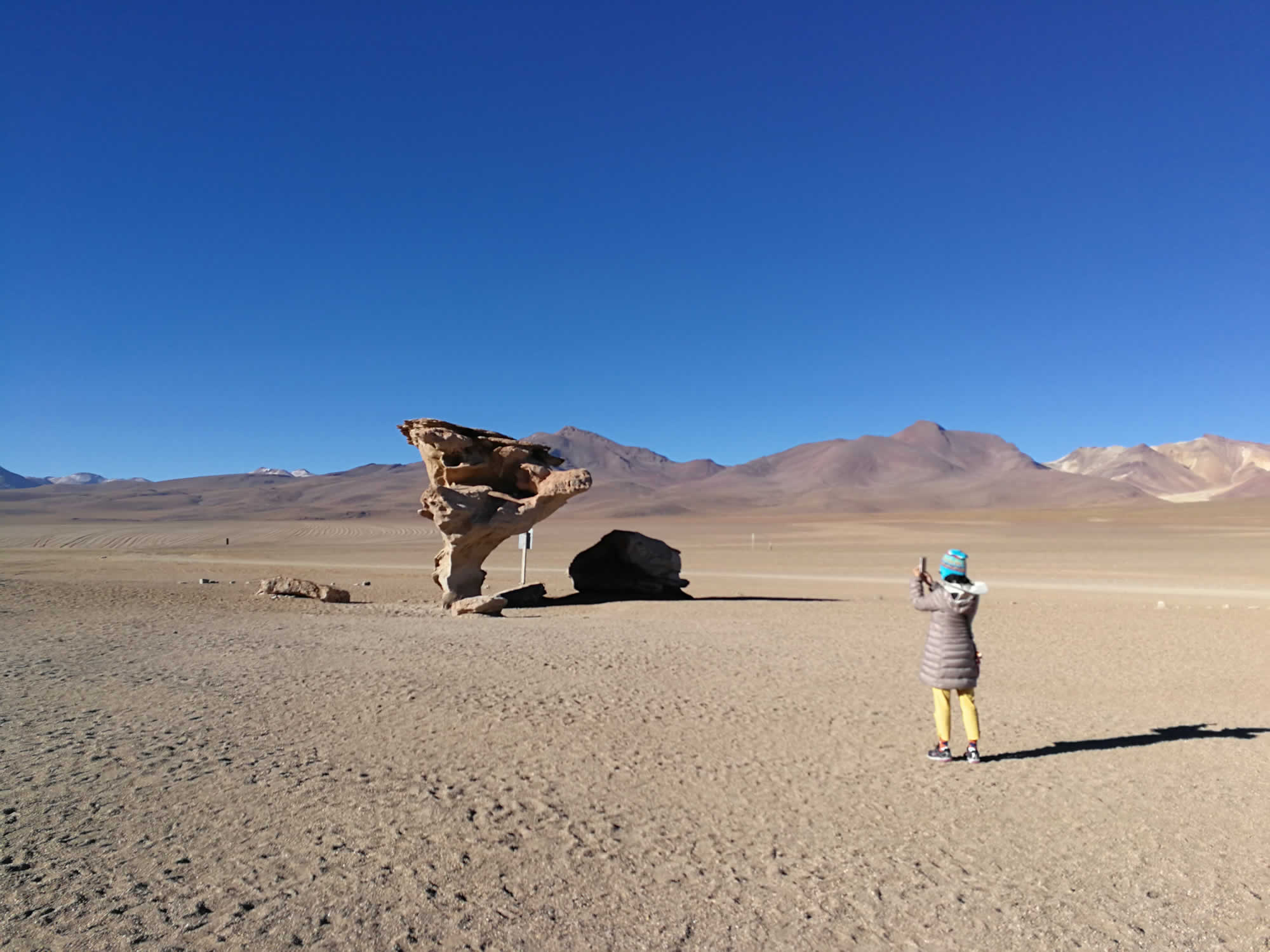 One of the classic photo opportunities that you won't be able to resist is The Árbol de Piedra (Stone Tree) which is a rock formation shaped by centuries of wind erosion in the Siloli Desert. The Siloli is geologically part of the same desert as the Atacama in Chile. It is a barren wilderness with roads that stretch beyond what the eyes can see.

The Laguna Blanca (White Lagoon) is a breathtakingly beautiful lake near the border with Chile. It is separated only by a narrow stretch of land from the vivid green Laguna Verde. Both are located at the foot of the volcano Licancabur, which is visible from San Pedro de Atacama. The Green lagoon contains arsenic, copper and other minerals which render colour to the lake waters, and the disturbance by the winds usually cause it to evolve from turquoise to a dark emerald colour.

The Laguna Colorada (Red Lagoon) has crimson pools of water mottled by patches of contrasting white borax minerals, making it look both otherworldly and breathtaking.

The reddish tones are caused mainly by the pigmentation of the salt-tolerant algae Dunaliella salin and the whole area looks like it belongs somewhere else in the Solar System. It is one of the most immaculate wildlife areas you can visit and if you come at the right time of the year you will be able to see thousands of flamingos nesting. 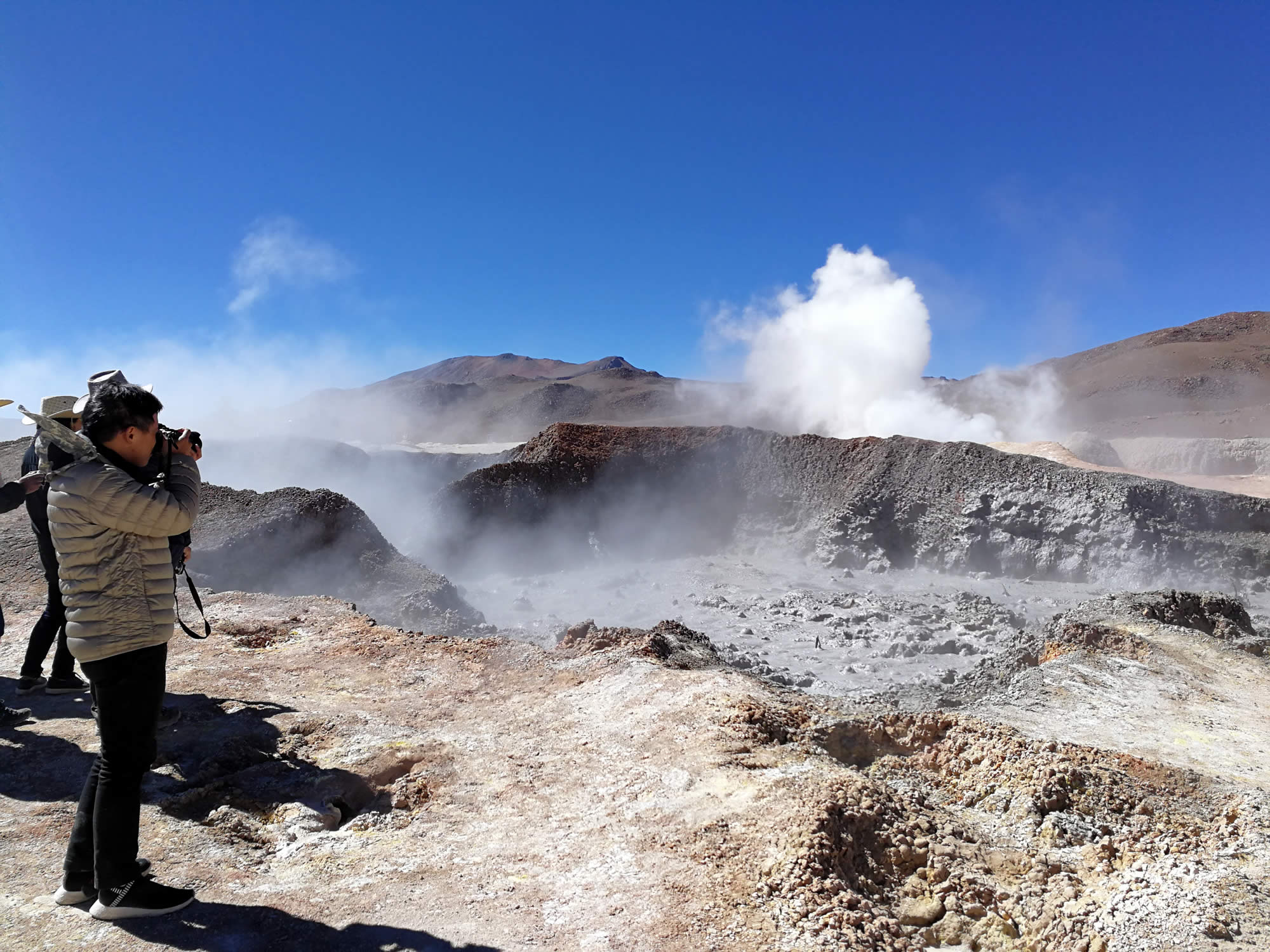 Sol de Mañana is an active geothermal field that is at its highest level during the early morning hours. Aim to arrive in time for sunrise and you will hear the rumble of the Earth's subterranean melting pot of minerals and liquids, before it gushes and spews the contents high up in the air through the crust. Be careful where you step though, as the ground is unstable and falling into the boiling mud can be fatal! 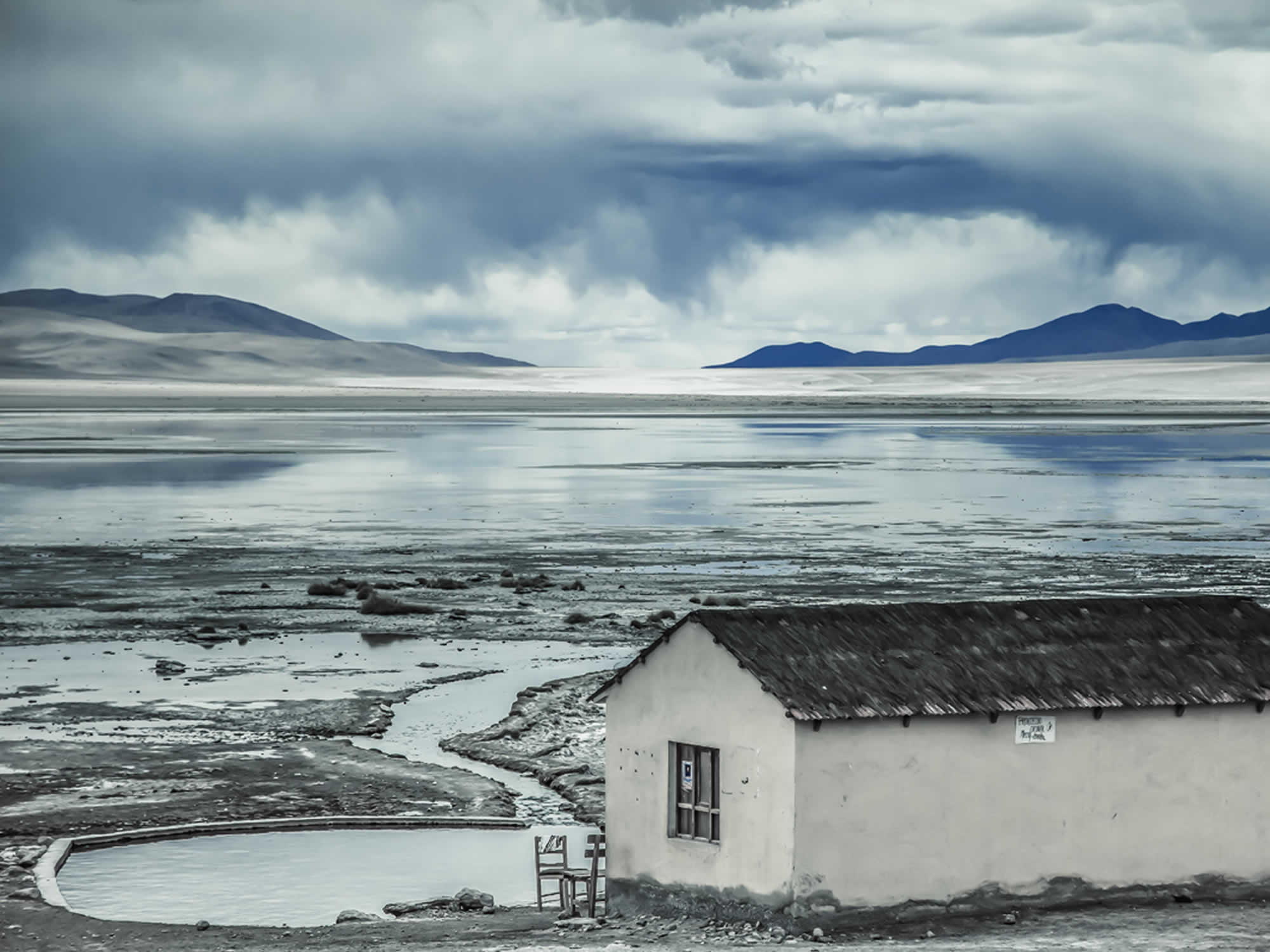 Not far, the hot springs of Aguas Termales de Polques will tempt you to change into your bathing suit in freezing temperatures. The setting of these hot water pools is both serene and surreal. The mineral-rich properties of the thermal water are said to relieve symptoms of arthritis and rheumatism.

The Laguna Hedionda could not have a more descriptive name. Due to the sulfur in the lake the smell is horrible, but it is not very strong so it does not complicate the visit at all. The water is not fit for drinking and only flamingos live in it. It is a beautiful lagoon, full of flamingos and surrounded by snowy peaks. 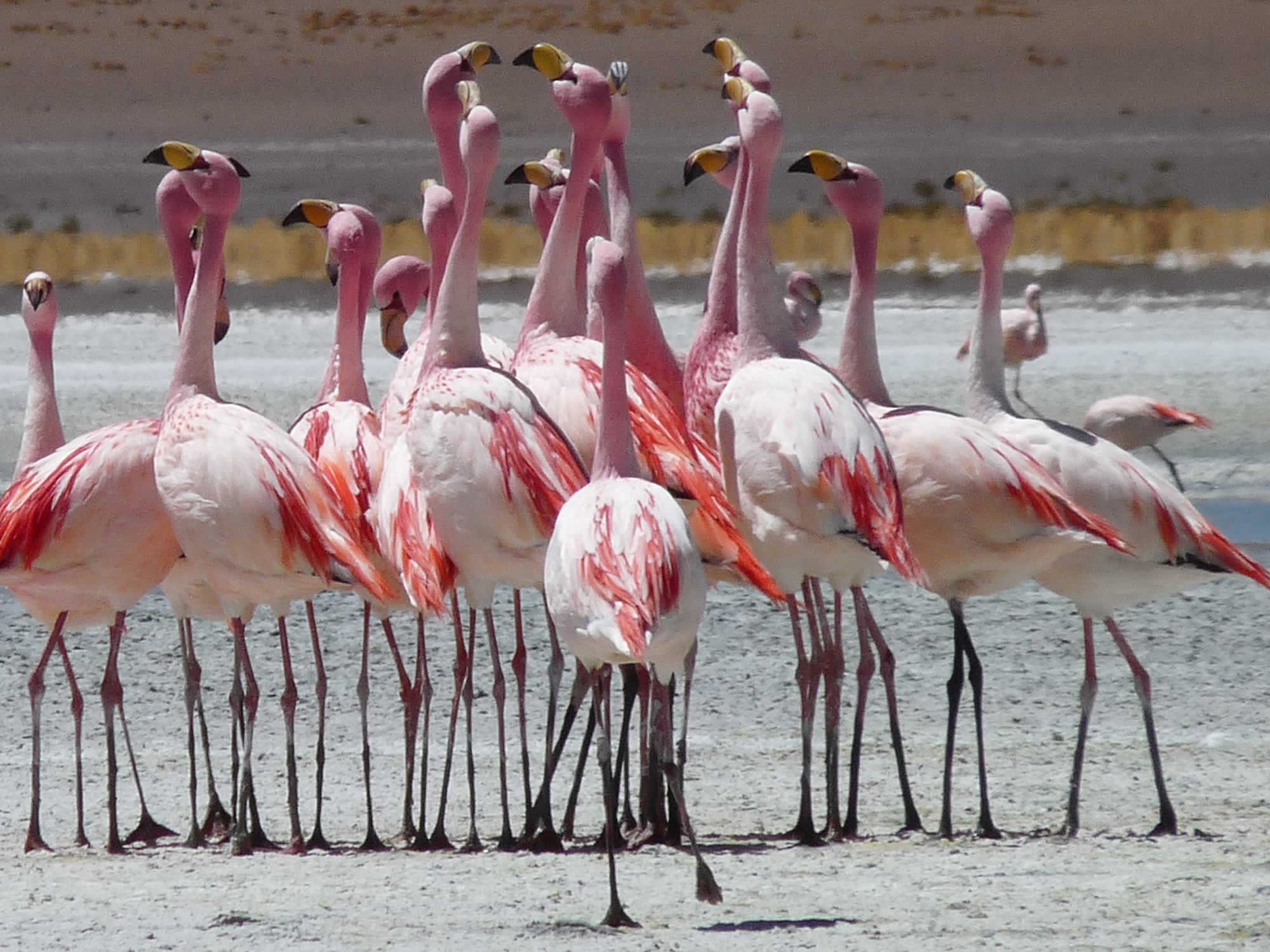 No trip to the Reserve would be complete without a glimpse of a few flamingos, and three of the six global species of flamingo (Chilean, Andean and the endangered James flamingo) can be found here. Pigmentation in the algae found in these parts contains beta-carotene, which gives these flamingos their pink colouring. The flamingos flourish in this environment, despite temperatures often dropping to sub-zero. 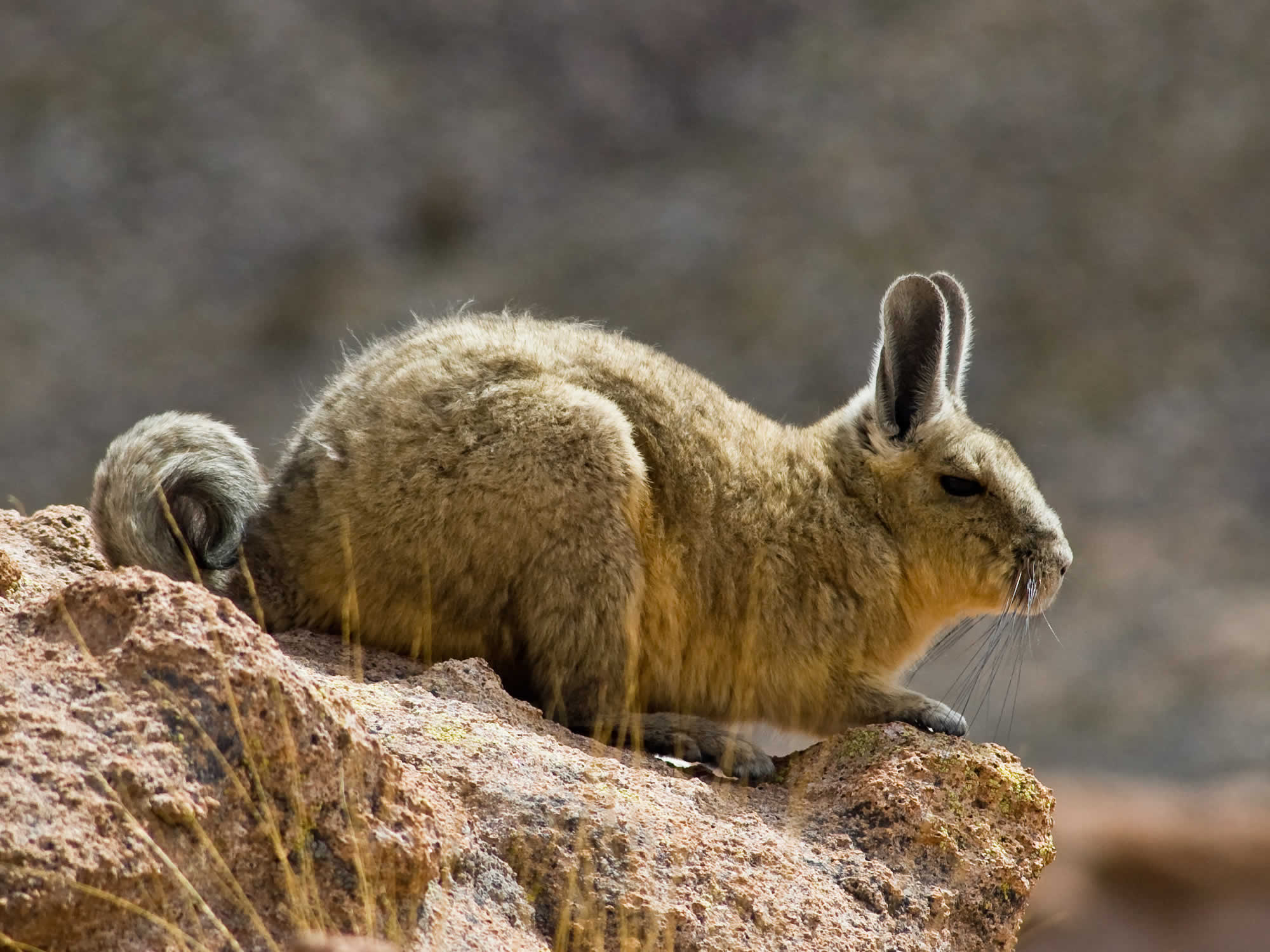 Lucky tourists can catch a glimpse of the cute, chinchilla-like viscacha. The are numerous free-roaming vicuñas. Herds of alpacas, llamas and guanacos are also common. 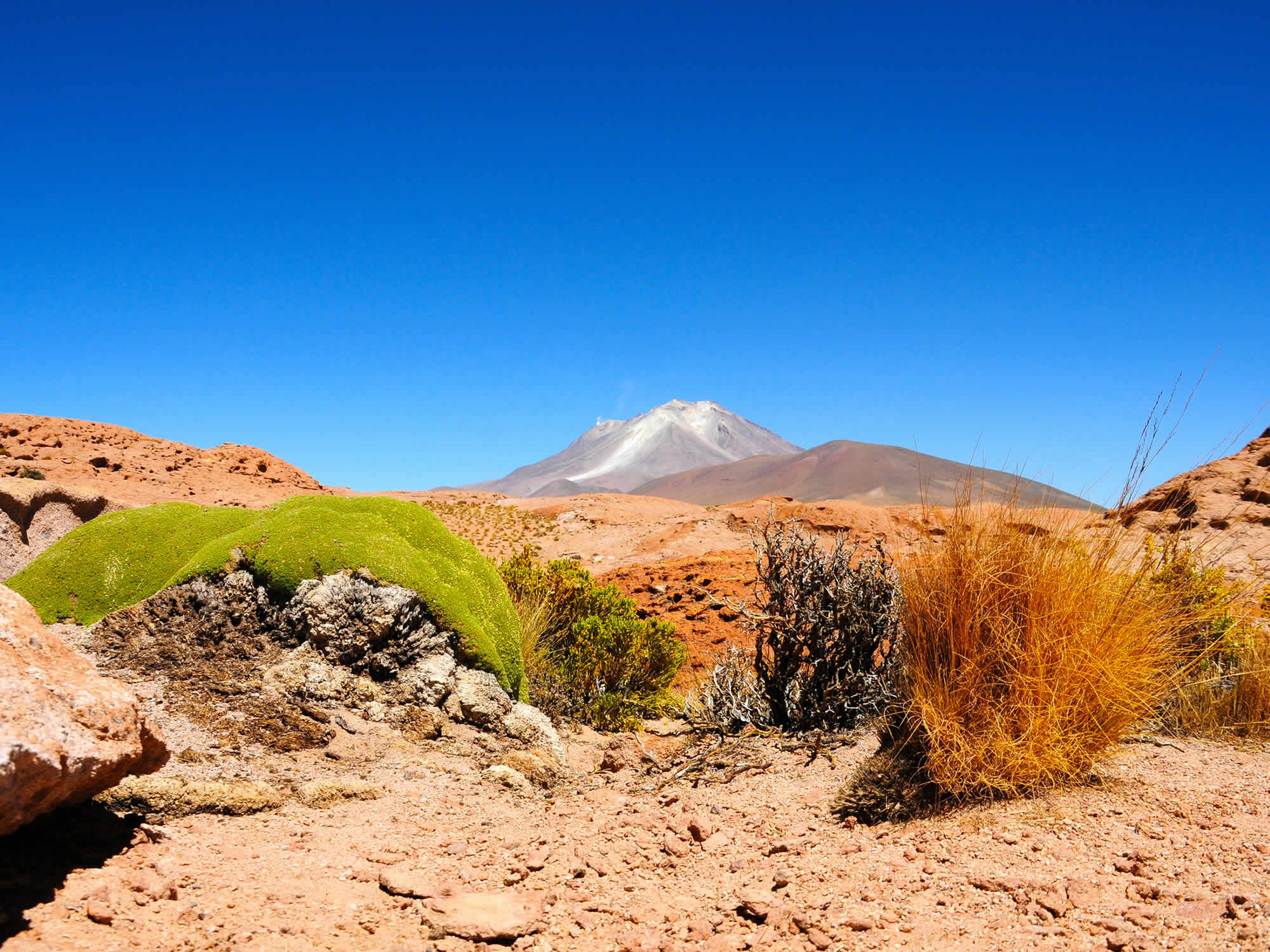 The fuzzy green lumps on the ground that dot the landscape are called yareta (or llareta), a hardy desert plant. It looks like a kind of mossy coating clinging onto groups of boulders, but don't be fooled by appearances or even touch – the firm mass you feel when you press down is not underlying rock, but thousands of densely-packed stems, and it's the tiny green buds that you see on the surface.

The most common plants here are amilies of tussock grass, or as it is commonly known in these parts, paja brava (tough straw). It propagates through clonal growth, where a single ancestor plant reproduces by cloning itself and spreading horizontally, often resulting in swirling clumps.

The Top Tourist Attractions in Uyuni

Perspective photos in the Uyuni Salt Flats: how to take them