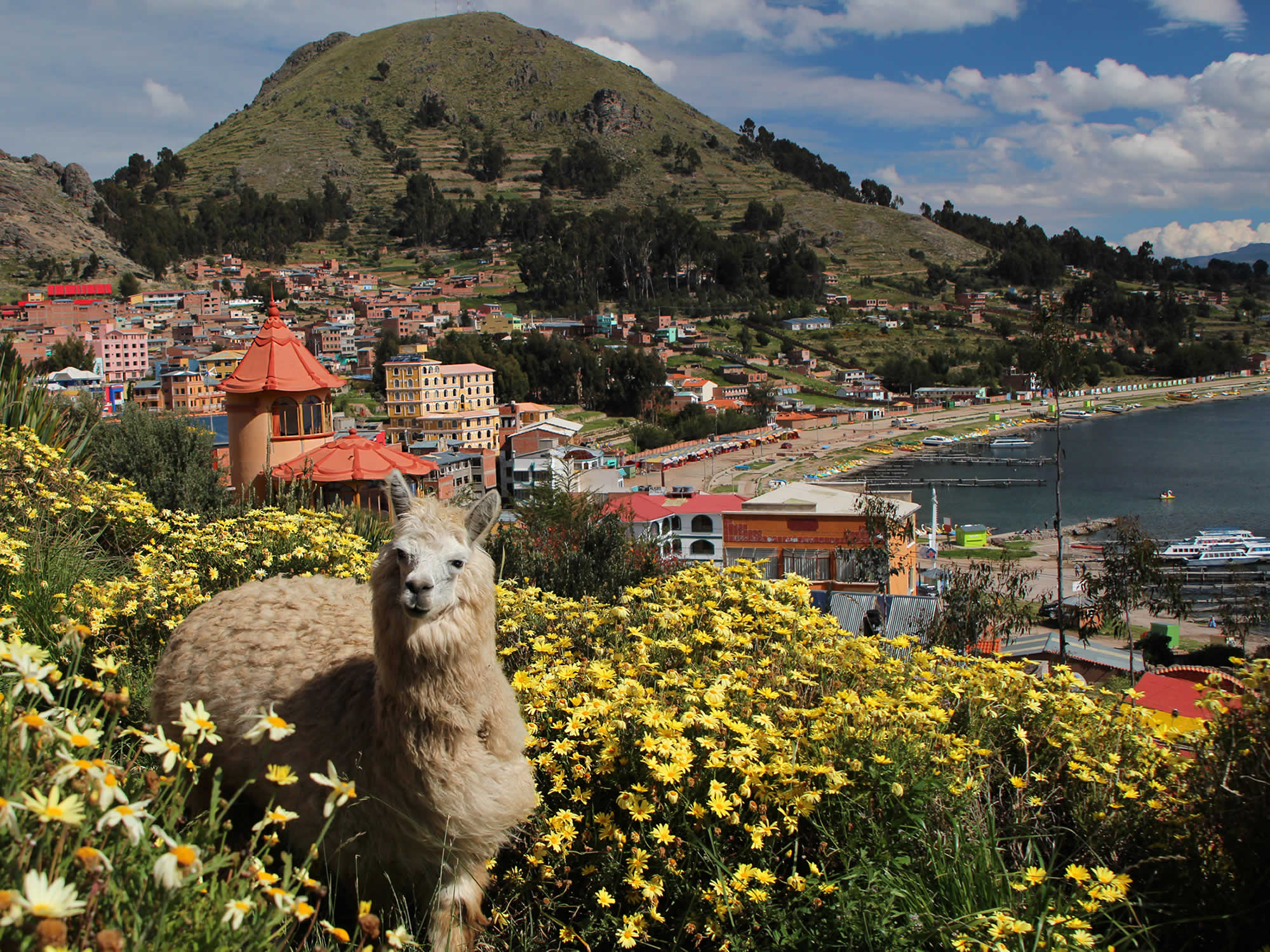 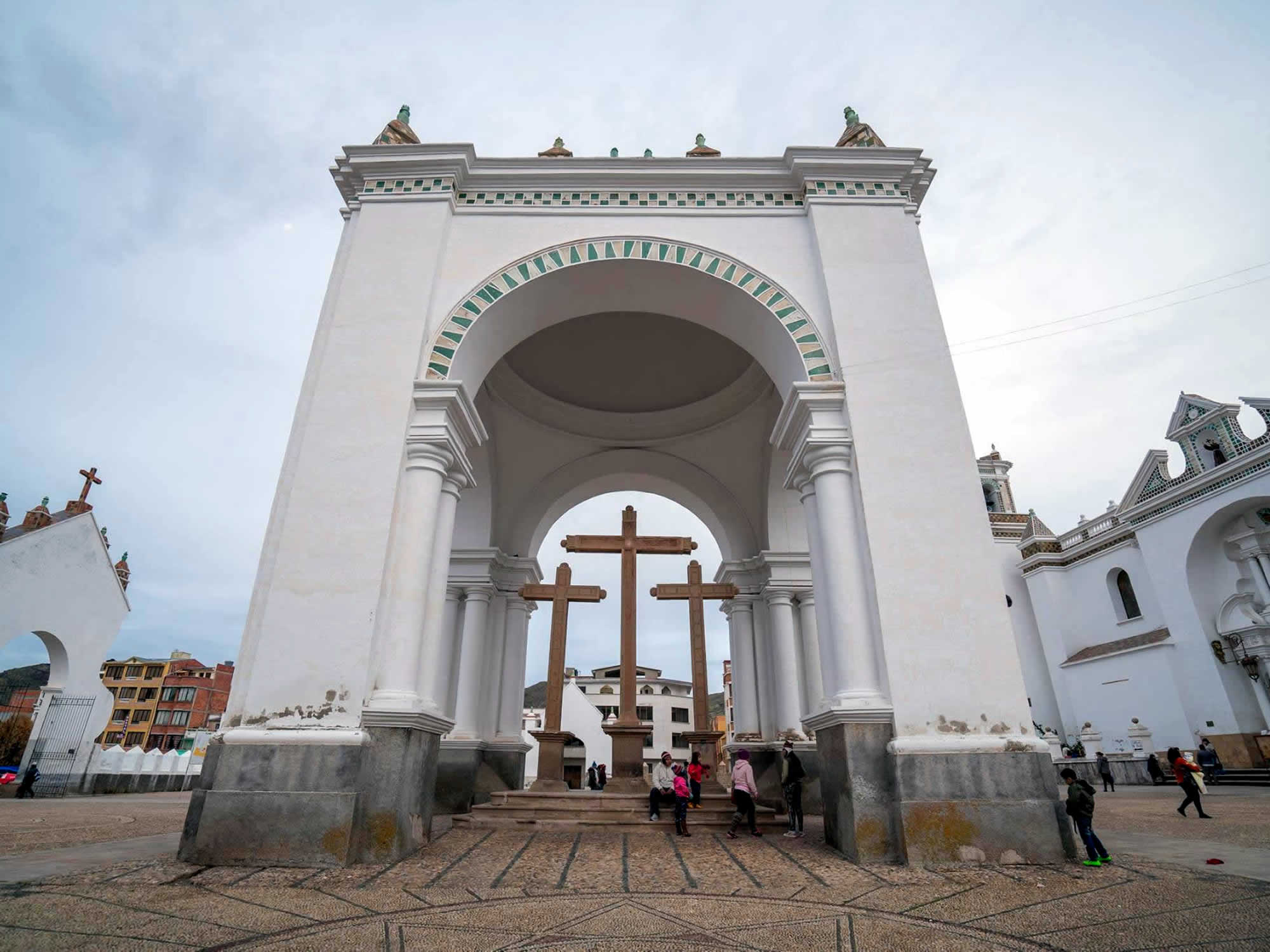 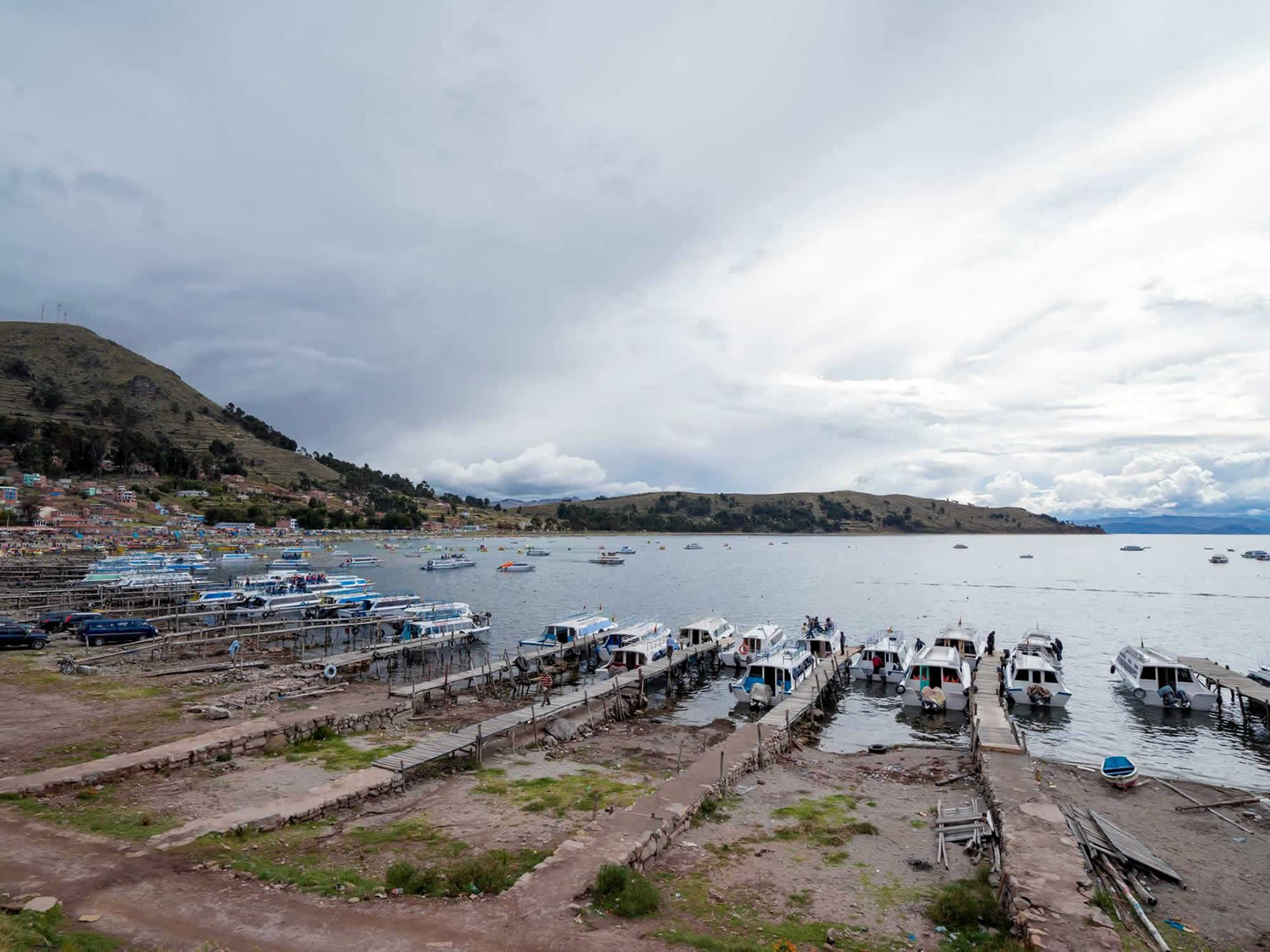 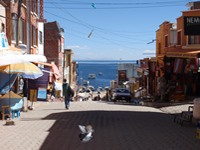 Copacabana is a small town located on the Bolivian shore of Lake Titicaca. Situated relatively close to the capital of La Paz, it's a popular resort destination for foreign travelers and locals alike.

Copacabana used to be considered a "mystic region", a ceremonial center of various cultures that existed there before the colonial times and these days it is considered a religious-peregrination center often visited by devote believers of the "Virgen Morena", the Holy Virgin of Copacabana. The parishioners come to this place to receive the blessings of the Virgin Mary and to do the traditional "Ch'alla" (Aymara word, which refers to a ritual practice in Bolivia, in which property is "blessed" with the belief that this blessing would protect people's possessions).

Close to the town of Copacabana there are several Pre-Hispanic attractions such as "La Horca" (The Gallows), "El Bano" (The Bath) and "El Asiento del Inca" (The Inca's Seat), all of which are part of an impressive and historical legacy that could be found scattered throughout the area, including in the islands of the Sun and the Moon.

This is the original Copacabana -- actually lending its name to the beach in Rio (and yes, the Barry Manilow song). The name derives from the Aymara kota kawana, meaning "view of the lake", and the region was revered by the Inca even before the Spaniards built their chapel of the Virgin and turned it into a Catholic pilgrimage site.

The town's central square is Plaza 2 de Febrero, and from there Avenida 6 de Agosto slides down to the lakeside. It's packed with souvenir shops, hostels, and restaurants, largely catering to foreign tourists. Avenida Jaregui one block north has a more local feel, with street markets and grocery stores.

Copacabana Cathedral, completed in 1619, is one of the oldest churches in Bolivia and is a fine example of Moorish style architecture. (The current structure dates to 1805.) It houses the statue of La Virgen de la Candelaria (also called the "Dark Virgin"), reputed to have miraculous healing powers. The original statue was carved from cactus in 1583 by Francisco Tito Yupanqui, nephew of Inca emperor Huayna Capac. It has made the church Bolivia's most revered pilgrimage site, and its reputation traveled far and wide in its time, even leading someone to create a replica and build a chapel for it on a beach in Brazil.

The imposing hill of Cerro Calvario overlooks the town from the north end of the beach, and it's a moderately strenous 30-minute climb. There are fourteen stations of the cross along the way, where you may want to stop and pray for stronger legs and lungs. The best time to go is around sunset, and hope the weather cooperates.
On the other end of the shore are two hills with ancient Inca ruins.

The one and only culinary specialty is trucha, or salmon trout, fished from the lake. Practically every single restaurant serves it, and there's a long row of identical stalls on the beach. Many places also serve pizza and pasta, presumably for those who've had enough (or don't like) fish.

There's hardly any point in going to Copacabana without a trip to Isla del Sol. Boats leave around 8:30 for full day tours with stops at the north and south of the island. Half day tours are also available in the afternoons, typically visiting just the south. Walk all the way to Yampupata. It's about 17 kilometres or 4-5 hours, along a dirt road with a few ups and downs and very little traffic. The scenery on the way is superb.

How to get there

Buses leave from La Paz' cemetery bus terminal; the travel time is 3-1/2 hours. At the Tiquina Strait, you get off the bus and take a quick ferry ride to pick up the bus (which is ferried across by barge) on the other side. Buses arrive in Copacabana at Plaza 2 de Febrero and leave from Plaza Sucre.

Buses also leave from Puno in Peru, and take roughly the same 3-1/2 hours to arrive in Copacabana; half an hour is typically spent at the border, just 5 miles south of Copacabana.

Vans and/or shared cabs leave for the Peruvian border from Plaza Sucre as soon as they fill up. From the border to the Peruvian town of Yungani its about 2 km. From Yungani to Puno buses and vans leave several times every hour. This way is somewhat slower and less comfortable, but cheaper, than direct buses.